Northern Michigan: Renovation Story of a Victorian Home in Petoskey 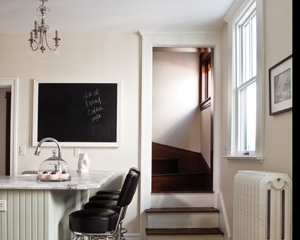 About a year after were were married, Trevor, my husband who is a Northern Michigan contractor, came home, shuffled through his mail and mumbled, “There’s something about that house.”

“That house,” he said. “That white house on Division Street in downtown Petoskey. The one that’s vacant? Practically falling down?”

He looked up and smiled. “It wants me to remodel it.”

Flash forward six years, two kids and one investigative trip to the Emmet County records department, and I’m holding a phone to my ear, pacing the bedroom we were renting after selling our house east of town. “So sorry to bother you,” I say. “Do you own the big white house on Division Street in downtown Petoskey? I know this sounds crazy, but I’d like to make an offer to buy it.”

Built in the late 1890’s, the house at 105 Division Street in Petoskey had been home to just two families—the Quaintances, of mayoral and railroad history, and the Christophers, who eventually gave the house to their grandchildren, held in a family trust.

The grandchildren never lived in the house, and it sat vacant for decades, with only the occasional renter. A blessing, really, because the 120-year-old clear-coated, quarter-sawn oak, grew more beautiful with age and didn’t fall victim to modernization. Neither did anything else.

The lights were original to the home’s electricity. The first bathroom, added after the house was built, remained in the basement, with an elaborately carved toilet, next to a giant cistern where the family collected water for cooking and bathing. The house was a graveyard for maids’ and cooks’ bells.

There’s a secret panel in the woodwork, pocket doors in each room, and stained glass to brighten both stairways. And from the front windows, one can see the waves of Little Traverse Bay crash onto the shores of both Petoskey and Harbor Springs, and the sun set into the giant lake beyond.

We knew we couldn’t simply remodel this sort of house. From the day we climbed through a broken back window to check out what we’d bought (there were only warded locks on the doors, with no remaining keys), my husband, president of Doublestein Builders in Petoskey, began forming a crew of his best subcontractors who would modernize what was behind the walls, and restore the charm of everything else. Those who worked at 105 Division represented small-town folks—they arrived early, ate lunch together on the front porch, and showed up any time there was a question—even in the middle of the night.

Trevor first brought in his cousin and his father, and the most cheerful Northern Michigan carpenter, Tom Dever, for demolition and to build a laundry room, master bath, and practical kitchen and bathrooms fashioned by Dawn Whyte of Designs by Dawn. The Michigan plumbers, M & E Plumbing, removed lead pipes and solved where’s-that-water-coming-from mysteries, and even called us when an old downtown restaurant was tossing its vintage sink during a remodel.

Jason Kromm, a Michigan electrician, and his employees at Bear River Electric installed modern wiring, and came over at 10 p.m. when Trevor was having trouble putting up fixtures. Brian Calnan of Pole Barns Plus stayed overnight in the unfinished garage during a rainstorm, protecting the newly poured cement. Leigh and Jerry Cassidy of Trikita Tile & Design, a Michigan interior design firm,  installed our backsplash on a Thursday, and at 8 p.m., when Trevor decided it didn’t suit the kitchen, came over with cookies to design a new one. By early Friday afternoon we had a stunning, more appropriate backsplash. Bill Clutter of Pella Windows helped Trevor safely remove the original pulley-style windows, and find replacements that look like they’ve always been here, offering such views of downtown and Little Traverse Bay.

Outside, Trevor and his crew stripped the aluminum siding, and they, along with employees of Withey Painting & Services, sanded the original dark brown wood siding and filled the many insulation holes. Gary McNeil used five paint colors to restore the home’s outer beauty. The landscape architects of John Hoffman and Sons Landscaping transformed a giant dirt pile into a gorgeous old-growth backyard, with stone steps, flowering trees and giant rocks around which we’ll surely gather each year for our family photos.

The home still feels as though the Quaintance family would be comfortable entertaining here, with a restored fireplace, claw-foot tub, working radiators and chandeliers in the kitchen. But the zone heating, foam insulation in the attic and speaker system might surprise the settlers. The effort and care that helped bring the detailed home’s beauty back, however—they’re firmly rooted in the house’s foundations.

Lisa Doublestein writes from Petoskey where she is also Travel Editor at Traverse. travel@ traverse
magazine.com. Read Lisa’s six-part blog about her renovation at MyNorth.com/doublesteinblogs.