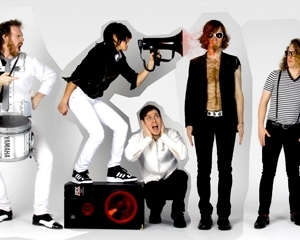 Northern Michigan Events: The Traverse City Winter Microbrew & Music Festival welcomes the Ann Arbor electro-pop outfit My Dear Disco for its kickoff party in downtown Traverse City, Friday, February 11, 2011. Named “one of the most promising bands in the nation” by the American Eagle New Music Union, My Dear Disco has played such acclaimed music festivals as Lollapalooza, 10,000 Lakes Festival, Wakarusa Festival and the A.E. Music Festival. The five-piece ensemble blends electronica, techno, rock, funk and pop for a distinctive sound the band has dubbed “DanceThink,” which has generated national buzz for the group and landed their music on television shows including “Melrose Place,” among others.

My Dear Disco will perform for the Traverse City Winter Microbrew & Music Festival in the historic Old Town district of downtown Traverse City. MyNorth caught up with lead singer Michelle Chamuel to talk about the band’s whirlwind last two years, their upcoming show in Traverse City, and what projects are in the pipeline for the tireless group – including a new album and collection of music videos.

MyNorth: My Dear Disco was originally preceded by a band called Toolbox, which had some of the same members now in MDD. How did your involvement in the group come about?

Michelle Chamuel: More and more people kept getting added to Toolbox when it was going, a few years ago. Then Robert Lester joined, who I knew through the music department at U of M. He and I did a song together called “My Dear Disco,” which I sang on and he wrote music for. He played the song for the guys in Toolbox, and they said, “We should do a song with her.” Because they were doing a lot of collaborations and guest spots with other artists at the time.

After our first show at the Blind Pig in Ann Arbor, Tyler (Duncan, Toolbox and My Dear Disco member) called me and said, “It’s going to be hard for the band to do this song again without you. How would you like to be in the band?” I had no idea what it took to be a band member, but I said, “Sure!” (laughs) We realized we wanted to take the band in a new direction, so we decided to rename ourselves My Dear Disco.

MyNorth: You describe your music as “Dancethink,” which is also the name of your debut album and your website. What does that term mean to the band?

Michelle Chamuel: It’s about a meeting between the mind and the feet. There’s the dance aesthetic, which to some people can seem mindless because of its repetition and pulse. But the think part comes in because we’re all music school nerds, so we put a lot of care and craft into the instrumentation, the beat, the lyrics. The production gives you some ear candy, so you can dance to it out on the floor in a crowd, but you can also listen to it alone at home and pick it apart in your headphones.

MyNorth: You’ve been in the studio lately working on your second album. What can you say about that project?

Michelle Chamuel: We’re still figuring out what that’s going to be. It’s not exactly a full-length album, but we’re definitely going to be releasing new music soon. Two of the songs have already been previewed on Tree Town Sound, Ann Arbor’s 107.1 FM show: “Love Child,” which is more of an angsty rock song, and “It Could Be,” which we’re releasing a new version of soon.

MyNorth: Will you be self-releasing this music, or do you have a label?

Michelle Chamuel: We’re self-releasing. We can’t say an exact release day yet, but it will be soon. As a band and as a company, which we are, you want to make sure that when you’re working with someone, it’s a partnership versus them taking control of your music. So if the right deal came along, where we had a partnership with a label, we’d be down with that. But for now it seems like doing it on our own is the best way to go.

MyNorth: In addition to your original songs, you’ve also received attention for some creative remixes you’ve put out, including one of the Black-Eyed Peas’ “I Gotta Feeling.” How do you decide which songs to take on as remix projects? Are there any plans to release more remixes in the near future?
Michelle Chamuel: We do have some new remixes in the pipeline. We’ll be releasing another one pretty soon. In terms of how we choose songs – we’ll usually sit together as a group and throw out ideas. With the Black-Eyed Peas remix, that was one that Tyler was inspired by and wanted to get on. Different band members are grabbed by different things.

MyNorth: My Dear Disco has a highly interactive Facebook page. You ask a lot of questions of your fans – what songs they like, what they want you to cover, where you should play. How important is that fan interaction to the band?

Michelle Chamuel: It’s very important to us. We like hearing back from our fans and knowing what they think. Without them, there’d be very little point to any of this. So we try to keep that communication going, keep the love flowing back and forth.

MyNorth: What role, if any, does their feedback play in the creative choices you make?

Michelle Chamuel: Our fans definitely influence us. When you’re making music as a living, the process expands beyond just the band. You have a lot of people working together to make this vision happen. So we take outside ideas and suggestions and filter them through our band to come up with what we want to do.
MyNorth: Your success couldn’t be called overnight, because you hit the road hard and played hundreds of gigs in 2009 and 2010. Still, in just a few short years you’ve reached a remarkable level of recognition – playing prominent music festivals, having your music on TV show soundtracks. What impact has that success had on the band dynamic, and what kind of doors is it opening now for you?

Michelle Chamuel: In a way, our journey is just like anyone’s journey who’s going from college to post-college to professional life. It’s always a transition. It’s an evolution, finding out exactly what it takes to do what you love. The vibe of the band is family-like; we all love each other. We have our ups and downs like anyone else. But yeah, I do see it as being similar to making the jump from a college student to a professional life. You become more serious, and maybe have more pressure, but you also see doors opening. It’s exciting.

MyNorth: You’ll be performing at the Traverse Winter Microbrew & Music Festival this Friday. What are you looking forward to at the event?

Michelle Chamuel: We love Traverse City. The fans there are amazing. They give us so much energy – and we give it right back. Any event put on by Sam Porter, you know it’s going to be a lot of fun. Plus, Traverse City is so beautiful. I think the guys are looking forward to trying some of the tasty brews. So it’s win-win-win all around. (laughs)
MyNorth: What’s coming up next for you guys after the festival?

Michelle Chamuel: We’re working on some tour dates, and we’re also planning on releasing some music videos to go along with our new songs. The exact dates for all of that will be coming out in the next month, so people should definitely keep their eyes peeled.

My Dear Disco will perform at the Traverse City Winter Microbrew & Music Festival on Friday, February 11, in the historic Old Town district of downtown Traverse City. For more information on the band, dancethink.com. For tickets and information about the festival, visit porterhouseproductions.com.