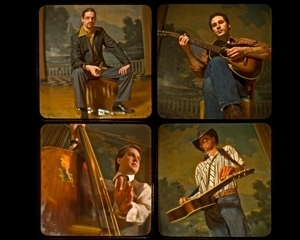 This weekend, the Traverse City Winter Microbrew & Music Festival—one of Northern Michigan’s favorite events—returns for a two-day celebration of craft brews, local food and live music. Headlining the music lineup on Saturday, February 12, are the Lansing-based rockers Steppin’ In It, whose lively mix of country, roots and edgy blues have won the band a loyal following across the state.

Bassist Dominic Davis and lead singer/guitarist Joshua Davis (no relation) spoke to MyNorth in a phone interview about Dominic’s recent headline-making tour with legendary singer Wanda Jackson and The White Stripes’ Jack White, Joshua’s successful solo career and new album, and what they’re looking forward to at the festival this weekend when Steppin’ In It makes its Traverse City appearance.

MyNorth: Dominic, you just came off a tour with Jack White and Wanda Jackson that included stops on the Letterman and Conan shows and a performance at the Grand Ole Opry. How did your involvement in that tour come about?

Dominic Davis: I’ve known Jack for about 25 years. We were in the same Catholic grade school class in Detroit. Last year, I was one of a couple bass players invited to play on Wanda’s album, which Jack produced. I went to Nashville to make the album, and then went back in September to film one of the music videos. I was lucky enough to then be invited on this tour, which was a lot of fun.

MyNorth: For a musician, it doesn’t get much better than the late night shows and the Grand Ole Opry. What was the experience of the tour like?

Dominic Davis: It was really cool. Because of the popularity of YouTube, Wanda’s maintained a big following. Her fans are constantly posting her old videos—of her performing on those great old sound stages, with a huge band backing her up. There’s still a nostalgia today for her work and that era of music.

What was interesting about the tour was that when the album first came out last year, the reviews were lukewarm. It was as if the album wasn’t breaking through somehow. But since the tour, the response to the album has been immediate and overwhelming. I think it helped for people to see her perform. She’s 73 years old, and she’ll play a 75-80 minute show with no signs of slowing down. It’s amazing what she does.

MyNorth: Josh, you were in the studio at the beginning of the year recording a new album. What can people expect from this record?

Joshua Davis: I think it’s more cohesive than my first record (“Fool Rooster”). It’s more soulful, more personal, a bit heavier. On the first album, I was mostly writing stories about other people, and I was also co-writing quite a bit. I kind of shied away from writing songs about me. The themes represented what I was going through, but this time around it’s more personal. There are songs about time – about never having enough time. There are love songs, and songs about being on the road. Which is a classic theme of musicians. So thematically, there seems to be a more cohesive line through this album.

Dominic Davis: I was actually in the studio working with Josh on this one. From my perspective, the album seems like an extension of the last one – the natural next step. I think Josh is finally making the album he’s always wanted to make.

Joshua Davis: It was very easy and natural in the studio. On one day, we laid down seven tracks in a row, which was incredible. So I feel really good about this collection of songs.

MyNorth: When will the album be released?

Joshua Davis: The plan is to do an official release tour in the fall. But I’m hoping to get the CDs back from the manufacturer by early summer, so I can have them with me during my summer shows.

MyNorth: How did you two meet, and what led to the creation of Steppin’ In It?

Dominic Davis: Andy Wilson (another member of Steppin’ In It) and I were playing together before we met Josh. This would have been…let’s see, 1998. In East Lansing. We were students at MSU. I worked at the music library, and Josh came in with his roommate one day, and that’s how we met. We got together and started messing around, playing a bunch of tunes. But it was really informal then – the music took a backseat to school.

Joshua Davis: I was living in a co-op, so we played a bunch of parties there. Then we started appearing at some of the local clubs. We put out our first record two years later.

MyNorth: How did you come up with the name Steppin’ In It?

Dominic Davis: The name is a title of a song we never actually performed. It’s a Herbie Hancock song. We’re not especially fond of the name, to be honest.

Joshua Davis: That is the understatement of the century. (laughs)

MyNorth: For those who haven’t heard you before, how would you describe your sound?

Joshua Davis: We originally started out as an acoustic four-piece group. But these days we have a six-piece group, which is the set-up we’ll have at beer fest. The sound is rooted in country blues, New Orleans music, traditional American forms. But our treatment of it is a little edgier. It’s a little bit of the old mixed with the new.

Dominic Davis: It’s the new school of blues and rock. Our drummer, John Cassidy, listens to these old classic songs, and it’s almost like he…beatboxes over them. He can so clearly hear what the beat is that’ll make the song more modern. He’s the time machine that bridges our generation with the past.

MyNorth: You guys have worked with Porterhouse Productions on several events now. How did you first get connected to Sam Porter?

Dominic Davis: We were at a conference in San Diego actually, in 2004. The Duhks (another band) were there with us, and they said, “Oh, you have to meet Sam.” We knew he was from Michigan, but he was living in Montana at the time. Because of that meeting, we ended up traveling out to Montana a few times and doing gigs there. He took good care of us—he’d bake us a chicken, make sure we were happy. It was a good relationship from the outset. (laughs)

Joshua Davis: When we heard he was moving back to Michigan, we were excited. He’s got so much energy, and he works incredibly hard to make these events happen. His enthusiasm is contagious.

MyNorth: You both performed at the Traverse City Winter Microbrew & Music Festival last year. That is one of Northern Michigan’s favorite events. What was that experience like, and what are you looking forward to this year?

Joshua Davis: It was a great time. We were playing with Rachael Davis, Seth Bernard and May Erlewine last year. The energy was awesome—we had a blast. The festival is going to be downtown this year, which is a beautiful thing. There’s a great music lineup, and with the event being so central to town, we’re really looking forward to it.

Dominic Davis: I’m excited for it. I’m almost more excited this year, because we’ll be playing with the six-member set-up. With this group, we can play a two-hour set and hardly need to stop. That’s the perfect kind of band for a beer festival. A serious band for a serious party. (laughs)

Joshua Davis: Friday night is going to be great, too. My Dear Disco is probably one of my top five favorite bands. Their show is incredible.

MyNorth: After the festival, what’s coming up next for Steppin’ In It?

Dominic Davis: We’re going to bring the six-piece electric band as much as we can to the festivals this summer. We haven’t given too much thought yet to our next album—we’re going to promote Josh’s first, and then probably figure out ours after that. But we’ll be playing all around Michigan this summer. We’ll be at the Traverse City Wine & Art Festival in August [another great Traverse City event], which will be great. People will definitely see us around up there.

Steppin’ In It will perform at the Traverse City Winter Microbrew & Music Festival on Saturday, February 12 in the historic Old Town district of downtown Traverse City. Joshua Davis will also perform a solo set during the Traverse City event. For tickets and more information, visit porterhouseproductions.com.