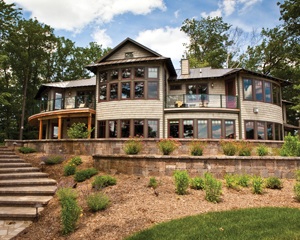 With the world a familiar place, it’s easy to envision Clark and his wife, Karen, building a second home anywhere on the globe—but the native Michiganders have long vacationed in Northern Michigan and have never considered anywhere else. Northern Michigan sunsets, says Clark, are “the best in the world.”

Even so, finding land that met all of the Buntings’ criteria—water, woods, privacy, proximity to Cherry Capital Airport—was a nearly two-year search that ended one winter day when Traverse City realtor Howard Vogel showed Clark an island in Silver Lake outside of Traverse City. Back in Maryland, Clark couldn’t stop thinking about the property. “Just like sometimes programming is based on a gut reaction—the island also felt right,” he remembers.

“It was breathtakingly beautiful even in the snow—so tranquil, quiet. I could just imagine the summer,” says Karen, who first visited the island trekking on snowshoes in a snowstorm. The property, the couple agreed, was worthy of the legacy home they wanted to build on it—a timeless Arts & Crafts-esque house constructed with cutting-edge green-build technology, a home they hoped would stay in their family for generations. To that end, Clark pulled together a dream team of designers and craftsmen and asked them to work Discovery style: collaborate toward an end product that exceeds the sum of the team members’ talents. The core of the team included builder Jan Peterson, who synthesized all of the home’s highly sophisticated design, technical and custom dimensions, as well as Maryland-based interior designer Victor Mettler. Also on the team were Vogel as project manager, architect Dave Whiteford and designer Marty Rhein.

Three years after its groundbreaking in 2007, the Buntings’ Northern Michigan residence is a gracious stone, wood and shake, Craftsman-style treasure that tucks low into its wooded site on the façade side, where a small channel separates the island from the mainland. The back of the home rises in a graceful curved shape to mimic the island’s arc while allowing long, leafy lake views—infinity views, Clark and Karen call them—from the home’s interior. The fluidity between the structure and its site belies a feat in architectural gymnastics to minimize the removal of trees and avoid wetlands. With its walnut floors, exquisite use of stone and tile, fireplaces, mahogany trim, deep earth-toned palette, quarter-sawn oak cabinets and masterful detail, the interior is an Arts & Crafts masterwork. Mettler and Rhein, working closely with Karen, whom they credit with a keen design eye, poured over books, magazines and websites on Arts & Crafts, Craftsman and Art Deco design to create an authentic look that is immensely livable by today’s standards. The spacious floor plan, which includes a guest apartment and home theater (watching television and movies is part of Clark’s job) is tailored for entertaining, yet a variety of cozy spaces, like the relaxing sunroom and seating in the window bays, succeed in creating an intimate scale.

Beneath the home’s turn-of-the-last-century patina is a structure built—from its insulated concrete forms to its state-of the-art geothermal heating and cooling system installed by Traverse City’s GeoFurnace—to receive an Emerald certification, the highest standard, in the National Green Building Program’s standards program. (The certification process is currently pending.) “With the Buntings’ level of commitment, we were able to incorporate materials and processes that exceed the highest level of sustainability. So, now, an estate-sized home is being operated on a yearly basis for less than what it cost to operate a 1,500-square-foot home,” Peterson says.

Sustainable, timeless, meticulously appointed, the Buntings’ island home is all of that. But most of all, as this summer proved, it is a getaway for this very busy couple and their two young-adult children, Kaitlyn and Ryan: A place to hop into the kayaks they keep up on the beach and paddle off into one of those globally-rare Northern Michigan sunsets.