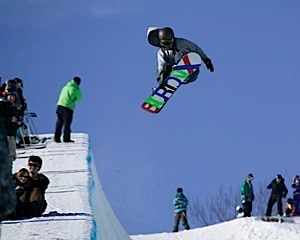 The Otsego Club and Resort, a Michigan ski resort and home to the premier terrain park in the Midwest, the O-Park, announces that the United States National Snowboard Team will be at the resort training January 14-18. The country’s top riders will be on-site training and preparing for this season’s upcoming national events.

The O-Park, which developed an avid following among elite snowboarders after the club hosted twelve of the top international Olympic teams last year, continues to attract the top riders in the industry to train at the elite facility.

Kris Klay, General Manager of Michigan’s only private ski club, is very excited about how the O-Park is attracting these world-class athletes to the region to train.

"We are very excited about how the O-Park has become a training ground for not only these world-class athletes, but also elite riders everywhere who want to train in a similar environment that they find out west," said Klay. "We are looking forward to having the United States National Snowboard Team training here at the O-Park and believe this is just the beginning of a long standing partnership for the United States best riders."

Bleiler, one of the most successful women in snowboarding, earned a silver medal in the 2006 Olympics. She also had a banner 2010 season making the Olympic team again, as well as earning a second gold medal in the X-Games. Gretchen was also the first female rider to perfect an inverted backside 540, known as the crippler.

Louie Vito, alum of ABC’s Dancing with the Stars, exploded onto the scene at the age of 17 with big super-pipe contest finishes at both the New Zealand (4th) and Australian Opens (1st). He landed his way onto the 2010 Olympic half-pipe Team where he finished fifth.

Greg Bretz began snowboarding at age five, competing by age 11, and a top rider on the Olympic team at age 19. The 2010 season was a stellar performance year for Bretz who took top five wins on multiple Grand Prix stops, X Games, and World Cups.

In addition to the top United States’ riders coming to the O-Park this season, the international teams from New Zealand and Australia will also be returning to train this winter.

James Hamilton, one of the top riders from New Zealand, is excited to return to the O-Park.

"The half-pipe is perfect and this is why we come back to train. It is world-class and as good as any pipe you will find in the world," said Hamilton. "It’s great here because we can stay right here at the resort and the chair lift goes right up alongside the half-pipe making training very efficient. I am looking forward to coming back this season and training here for the remainder of the season."

These top riders are making the journey to northern Michigan because of the commitment that the Otsego Club has made in creating this unique terrain park and super-pipe. Not only is the park unique to the region, but also the conditioning and maintenance of the O-Park by its designers, Planet Snow Design, is world-class, which is critical for the top boarders and riders to compete and avoid injuries. Planet’s crew is the same crew that designs and builds the top parks and venues around the world for elite competition. This is a big reason why the private ski club is attracting so many of the elite snowboarding athletes.

"The O-Park has created a level playing field for elite riders in the Midwest who want to train in an environment that prepares them for the national competitions out west. We are also experiencing a membership growth from families who not only love skiing, but also have young kids who compete in snowboarding events and want to take their skills to the next level," said Klay.

For families who love to ski and want to expose their young snowboarding kids to elite riding, the Otsego Club is offering some limited "Test Drive Package" opportunities to board alongside and see these world-class athletes in action. The "Test Drive Weekends" start at $595 for the weekend for a family of four. This includes two-nights lodging, two adult lift tickets, two kids lift tickets, and breakfast daily in the Duck Blind Grille. Lift tickets are good all day Saturday, and all day Sunday.

In addition, the resort also offers a new "Test Drive Membership" opportunity for the public to experience the best in private club skiing and riding along side these top riders. The "Test Drive Membership", which starts at $395 for a family, allows access to the private club for one-season. Families just have to stay on property and purchase lift tickets each time they visit the club.

To find out more information on the Otsego Club and O-Park and riding along side the countries top riders, call 800-752-5510 or visit www.otsegoclub.com and www.the-opark.com.