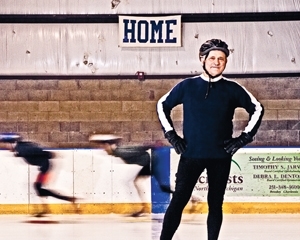 Shani Davis and Apolo Ohno put speedskating back on the radar for America’s winter sports fans when they racked up medals at the 2010 Olympics. A year later, we wondered if the sport’s publicity—and the fact that both Davis and Ohno had trained in Northern Michigan—resulted in any uptick in membership at the Petoskey Speedskating Club, one of two (Alpena is the other) remaining speedskating clubs in Northern Michigan. Bill Steffel, who began skating with the Petoskey club in 1950 at the spunky age of 8, gives us some perspective.

I always wanted to speedskate. I lived over the hill from the Petoskey Winter Sports Park, and I would go watch the team. I had an older brother, four years older, who speedskated, but he quit when I beat him. Speedskating was much bigger part of winter back in the 50’s. It was also tied in with the winter carnival, so we had a queen, the whole thing. Back then speedskating was organized and figure skating was organized, but we didn’t have organized hockey.

What was it about speedskating?

I liked the racing for the speed that we got on that ice. We were the fastest kids on the ice. That was part of our fun, get the big guys to chase us. You could throw a snowball at a big guy on the ice and then try to keep away from him.

Give us some sense for how things have evolved with the sport here.

When I was a kid we would get 150 skaters from all over Michigan to Petoskey’s regional skate meet, and we had about 45 or 50 people in the Petoskey club. Nowadays we draw about 70 people to a regional meet and we have about 12 people in the Petoskey club. And we have our success stories. The coach’s daughter is now training in Milwaukee (at the national long track training center), and we had a boy a few years ago who had a shot at the Olympics.

Are kids more interested since Shani’s and Apolo’s recent Olympics?

I think you see more of that where the athletes train. Like in Milwaukee where Shani trains on the long track people come to watch. But here we still have good energy in the club. My son Jeff and his wife Carrie and the coach Ed Russell have been working hard going into schools talking about the program to kids. They just started that last year and are already seeing success. The coach’s wife Holly really helps the little kids, and that makes a lot of difference. If you give the little kids time, that really keeps them in the club. We’ve got some good little kids coming up. Interested? Call coach Ed Russell at 231-347-5934.