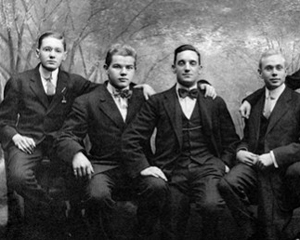 Northern Michigan will have two opportunities to hear the nation’s oldest collegiate a capella group, the Yale Whiffenpoofs, this weekend: at the Grand Traverse Commons in Traverse City and at Traverse City’s Central United Methodist Church.  Every year for the past 102 years, 14 senior Yale men have been selected to sing in the Yale Whiffenpoofs the world’s oldest and most famous collegiate a capella group. Maintaining a performance schedule of over 200 concerts annually in addition to a 14 week world tour, the group has performed for the likes of Presidents Reagan, Bush, Clinton and Obama in sold-out venues such as the Lincoln Center and Carnegie hall, and for such events as Saturday Night Live, the West Wing, and NBC’s The Today Show. Its a capella arrangements of jazz standards, classic ballads, traditional Yale songs, and recent popular hits continue to delight audiences all over the world.

On Friday, December 3, at 2 p.m. the group will stage an impromptu practice session in The Village at Grand Traverse Commons in the retail marketplace, located at the Garden Level of the Mercato. The lively, casual serenade will offer people the opportunity to listen to this extraordinary group as the prepare for a concert at 7:30 p.m, Saturday, December 4, at the Central United Methodist Church in Traverse City. The Saturday evening concert also features the Traverse City Central Choral-Aires in association with the the West Senior High West Men.