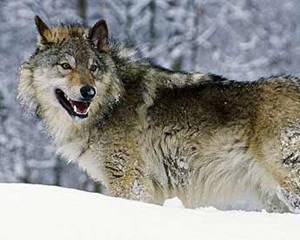 The wind isn’t the only thing howling in Northern Michigan these days. Head to the Outfitter in Harbor Springs on January 18 to catch the Wolves in Michigan lecture, and learn how the wild canines have been slowly making a comeback below the Mackinaw Bridge in the northern lower peninsula.

Mike Cromley of the Timberwolf Alliance will talk in Harbor Springs about how wolves have reintroduced themselves south of the Mackinaw bridge for the first time since a 1910 state bounty allowed Michiganders to completely eradicate pack populations.  He’ll share information on habitats, habits, history, tracking, as well as trashing myths that landed wolves on the endangered list in the first place.

Admission is free, but bring along a few canned goods for the Harbor Springs Food Pantry and an open mind. As the wolves adapt to living alongside more people in Northern Michigan than ever before, the question remains: can we do the same?

The Canis Lupus: Wolves in Michigan lecture will take place at 7 p.m. on January 18.  The Outfitter is located in downtown Harbor Springs. For more information: outfitterharborsprings.com