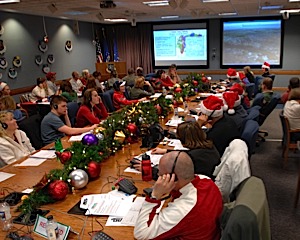 For the 55th consecutive year, the men and women of the North American Aerospace Defense Command are getting ready to track Santa! The NORAD Tracks Santa website, noradsanta.org, went live today and features holiday games and activities that change daily. The website is available in seven languages: English, French, German, Italian, Japanese, Spanish, and Chinese. On Dec. 24, the website will stream videos, captured by NORAD “Santa Cams,” from cities along Santa’s journey.

Also, beginning at 12:00 a.m. MST on Dec. 24, visitors to the website can watch Santa as he prepares his sleigh, checks his list, and goes through all of his preparations to ensure he has a successful journey.

As soon as Santa takes off from the North Pole, children can also track him with up-to-the-minute updates on Google Maps and Google Earth through the NORAD Tracks Santa website.
Santa trackers will begin answering phones and replying to email at 2:00 a.m. MST (4:00 a.m. EST) on December 24 and will continue until 3:00 a.m. MST (5:00 a.m. EST) December 25. Children of all ages can then call the NTS toll-free number 1-877-Hi-NORAD (1-877-446-6723) or send an email to noradtrackssanta@gmail.com.

The NORAD Tracks Santa program began in 1955 after a phone call was made to the Continental Air Defense Command Operations Center in Colorado Springs, Colo. The call was from a local youngster who dialed a misprinted telephone number in a local newspaper advertisement. The commander on duty who answered the phone that night gave the youngster the information requested – the whereabouts of Santa. This began the tradition of tracking Santa, a tradition that was carried on by NORAD when it was formed in 1958.
The NORAD Tracks Santa program has grown immensely since first presented on the Internet in 1998. The website receives millions of unique visitors from hundreds of countries and territories around the world. In addition, a live Operations Center is occupied for 25 hours with more than 1,200 volunteers each year who receive hundreds of thousands of phone calls and emails from families around the world.
The NORAD Tracks Santa program could not be carried out with the superb assistance of numerous corporate sponsors. New to this year’s program are Air Canada, Marine Toys for Tots, the Federal Aviation Administration, Colorado Springs School District 11, the Newseum, and Unified TelData. Returning sponsors include Google, Booz Allen Hamilton, Verizon, GlobeLink Foreign Language Center, Meshbox, Naturally Santa Inc, Time Warner, Analytical Graphics, Inc., PCI Broadband Inc., OnStar, Avaya Government Solutions, 5 Star Bank, First Choice Awards and Gifts and Santa’s Traveling Workshop Foundation.