Celebrate the Winter Solstice at the Headlands in Mackinaw City 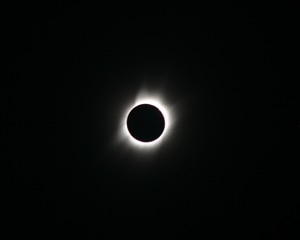 Winter solstice is always the longest night of year, but this year, it will also be the darkest.  On December 21, a total lunar eclipse—and the Ursid meteor shower—will occur after midnight, making the official start of winter one to remember.  The folks in Emmet County have planned a late night (and early morning) community celebration at the Headlands Guest House, a county-owned property near Mackinaw City in Emmet County.  MyNorth checked in with local astrosopher and Northern Michigan night sky expert, Mary Adams, to learn more about the event and the eclipse.

MyNorth: Is there something extra special about this year’s eclipse that makes it worth staying up to see?

Mary Adams: Eclipses of the Sun and Moon happen every year, twice a year, but they are not always total. There are several factors involved in what creates a Total Eclipse, and a Total Lunar Eclipse such as this one December 21st has not been seen in nearly three years. For the Eclipse to occur at Solstice is a rare event that can happen only every 19 years, and even at that, it may not be a Total Eclipse every time it occurs. You could say many cosmic factors must conspire in order to create a Total Lunar Eclipse at Solstice, so this is a rare treat, indeed, and during a meteor shower, as well.

MyNorth: Cosmic factors—that sounds like the makings of a great story.  Do you have a favorite piece of moon or solstice lore?

Mary Adams: The Egyptians understood that there are 360 degrees in a circle but 365 days in the solar year, so they had this marvelous story that explained why the discrepancy: The Earth Goddess Nut was unfaithful to her mate, the Sun God, Ra, and she became pregnant. When Ra discovered her infidelity, he cursed her, exclaiming that she would have this child in no month and no year of the Egyptian calendar (in other words, perpetual pregnancy was to be her lot!). But Nut had other lovers, one of them Thoth, who gambled with the Moon and won the 72nd part of every day from the Moon. When he had five full days, Thoth placed them at the end of the Egyptian calendar, and since these were days that did not belong to the Egyptian calendar, Nut was able to give birth, first to Osiris, then Typhon, Nepthys, Isis.. It is a marvelous story regarding the relationship between Sun, Earth, Moon and the precession of the Equinox, which results in all manner of influence on life on Earth.
I also love the ancient Norse belief that Winter Solstice was a Goddess escorted to Earth by two great white bears.  Solstice for them was not a moment in time, but an actual being, and those bears are Ursas Major and Minor, tipped on end overhead at Winter Solstice, shooting stars earthward which the Norse believed to be the Goddess of Solstice. We can still see this meteor shower, and will be able to the night of the Eclipse because the otherwise bright light of the Full Moon will be eclipsed…that’s pretty exciting!

This especially so since this Total Eclipse at Solstice pre-dates the fulfillment of the Mayan Calendar at Winter Solstice 2012 by two years; there’s always a set-up in the best of stories.

MyNorth: What’s happening at the Headlands in Mackinaw City? Is that a perfect spot for viewing the eclipse?

Mary Adams: The best place to view an eclipse is under a totally dark sky, and this is why we are seeking International Dark Sky Park designation for the Headlands, which is naturally free of light trespass and light pollution. In the winter months in the Northern Hemisphere, the Full Moon arcs high overhead, so you want to be in a place where you have a great view of the Moon, and a reflection of the Moon on the water makes the event all the more mysterious and beautiful, again, another reason the Headlands is ideal, because of its location along the shores of Cecil Bay in Northern Michigan’s Emmet County.

We will also have telescopes and binoculars and night sky experts, as well as a back up plan, should the Northern Michigan sky be overcast. If need, we will be inside the Guest House at the Headlands in Mackinaw City with projection equipment to stream live images of the Eclipse from an area where it can be seen, and of course there will be storytelling and light refreshments. Folks should be dressed for the outdoors, but know that they have indoor access should they need.

MyNorth:  You mentioned the International Dark Sky Park designation…What is that?

Mary Adams: Emmet County has a Dark Sky initiative to create a designated area of land over which the night sky will be protected from light pollution and light trespass, and where educational programming, observing events and storytelling can take place, in a natural, night sky environment.

Mary Adams is the author of the Fairy Tale Moons calendar, a beautifully illustrated year of astrological lore.  She’ll be telling stories and sharing Fairy Tale Moons at Horizon Books in Traverse City on Saturday, December 18 from 12-2 p.m., and in Petoskey’s Horizon Books from 4-6 p.m. on the same day. To learn more about the Dark Sky Initiative or the eclipse event at the Headlands, visit emmetcounty.org

Watch the video of Mary Adams talking about the exciting plans to create a night sky park at The Headlands!
X
X