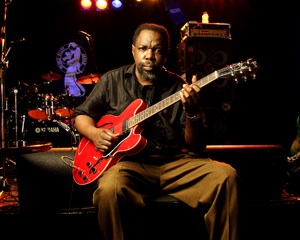 Traverse City: The Dennos Museum Center at Northwestern Michigan College will present The Lurrie Bell Chicago Blues Band on Saturday, January 8, 2011 at 8 PM in Milliken Auditorium. Tickets are $25 advance, $28 at the door and $22 for museum members. Tickets may be purchased on line at www.dennosmuseum.org or by calling the box office at 231-995-1553.

A noted performer of the Chicago blues scene, Lurrie Bell is the son of blues harmonica master Carrie Bell.  Lurrie started playing guitar at the age of six, and in his teens he polished his skills playing with the legends of Chicago blues scene including Eddy Clearwater, Big Walter Horton and Eddie Taylor. In the mid 1970s, he went on to join Koko Taylor’s Blues Machine and later he formed The Sons of Blues with Billy Branch, who says of Lurrie Bell "He may be the greatest blues guitar player that ever lived."

“The blues have been an ongoing part of the concert season at the Dennos for 19 years,” says Gene Jenneman, Director of the Dennos Museum Center in Traverse City, “We have some great blues acts coming in 2011 and taking the recommendation of the blues DJs at WNMC we are pleased to kick off 2011 with Lurrie Bell.”

More information on this concert can be found at dennosmuseum.org or lurrie.com.