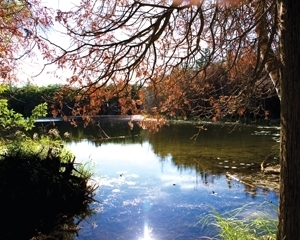 As far as rivers go, the Platte doesn’t stand out. Flowing west and south through Benzie County for 30 miles, the river drains about 193 square miles, mostly of forested hills. It is neither deep nor wide. And although it is popular with day canoeists, the river offers no whitewater.

It was too small to capture the imaginations of serious explorers, and, these days, anglers routinely bypass it en route to the Pere Marquette or the AuSable. Even the river’s historical significance to Native Americans and its important role in the modern salmon fishery in the Great Lakes arguably have not earned the Platte an enduring reputation in the world, the nation, or even the state. It is essentially a local river.

Earlier this year, wanting to answer some questions about the Platte that I’ve been compiling for nearly a decade, I spenta muggy day poking around the air-conditioned archives of the Benzie Area Historical Museum. Here’s a sketch of the river’s modern history, a familiar story, that I pieced together at day’s end over a slice of cherry pie at the nearby Cherry Hut restaurant.

Until the final decades of the 19th century, the Platte flowed through old growth forests as it had for centuries. Then the lumbermen arrived, established the village of Honor in 1895, and began sawing away. One black-and-white photograph dug out of a file box showed the Guelph Patent Cask Company in Honor at the turn of the century. The Platte—named for some early settlers—is a dark strip of placid water just below the centerline of the photo; on both banks, stacks of logs await the mill, with its jutting smokestack, standing to the left. Denuded hills, source of all those logs, loom in the background.

By the end of the second decade of the 20th century, the lumbermen packed up and moved on, leaving mostly stumps. The river and land were ripe for conservation, and, eventually, tourism. Efforts included the creation of the Platte River State Fish Hatchery upstream from Honor in 1928, projects of the Civilian Conservation Corps, and the creation of areas protected by the state, and eventually, after much controversy, the federal government in the form of Sleeping Bear Dunes National Lakeshore.

A more personal history, however, connects me to the Platte. The details are wearisome, so let me just say that for yearsI sought respite in its clear waters from a busted relationship I spent too much time trying to fix. It is also where I routinely escaped from a job that had turned out to be a futile exercise in leading an ossified organization. Frustrated, I would drive 40 minutes south and cast my line while the telephone surely rang in my darkened office. Some nights I camped next to the river, fished again at sunrise, and drove back to the office just in time to answer the first call of the morning. During those years I often wrote questions about the river in the notebook that I kept in the glove box of my pickup but which is now buried in my storage locker. The pickup was sold for parts five years ago.

The Platte is also where I retreated for two days in the week following September 11. Late that Saturday afternoon I was sitting in my office, unable to focus, when the phone rang. It was a friend who had moved back to Northern Michigan fromLower Manhattan two days before the World Trade Center, visible from her old apartment, crumpled. We met at the campground on Goose Road before sunset.

A small American flag hung from the antennae of her Subaru, and she said that she had been to Mass for the first time in she didn’t know how long. As we fished a stretch downstream toward the bridge on Pioneer Road, several jets streamed westward high overhead through the evening afterglow. The restrictions on air travel had been lifted, and the country was beginning to move again.

The stretches of the Platte I fish have been designated a Blue Ribbon Trout Stream by the state. Some anglers may contest this designation, for this part of the river can hold pockets of indiscriminate steelhead fry, which, released from the hatchery, snap at most flies dropped or drifted in front of them. This can turn a quiet morning of fishing into a killingspree and ruin an entire day. Some of these fry grow into sizeable fish that make their way out to Lake Michigan and, as their life cycle requires, eventually back into the upper reaches of the Platte, where they again frustrate anglers—but for the opposite reason, an unwillingness to take a fly.

One autumn afternoon years ago I watched a man with a smoldering stogie dangling from his lips slap the water with his fly rod and curse a steelhead shooting like a torpedo upstream and out of his range. Still, the designation rightfully distinguishes the river for its scenic beauty, which, to me, is the most compelling reason to fish here anyhow.

Several evenings ago I borrowed a car and stole away to fish one of my favorite lengths of the Platte. It’s a short stretch—probably a half-mile or so—which, when I move slowly, as I prefer, can take two hours or more to fish. I strung up my rod and pulled on my waders, the ones with the leaky left boot and drooping right shoulder strap, and walked through the tall grass toward the river. Oily muck tugged at my boots. A man was stepping out of the river on the opposite bank, just 25 feet across the rushing water.

“The fishing sucks,” he said. “I probably caught two dozen, none of them legal.”

I stepped into the river shouldering some of the usual worries about family and money. Nothing too heavy. It was just past six o’clock, and downstream a blinding streak of silver sunlight radiated from the water. I turned and cast upstream to a short run and let the fly drift with the current. A nip, so I cast again. Nothing. And again. Again nothing. Like the man said, the fish was probably too small anyhow, so I reeled in and waded over to the opposite bank, which was lined with tall grass. Dragonflies perched on the slender stalks, their metallic bodies sparkling green and blue.

It is the memory of such dragonflies—and of belted kingfishers and wild irises and the red speckles on a brown trout—that I have carried with me in the months, and now three years, that I have been unable to make it down to the Platte.Certain details of the river always remain sharp, and I have accessed them in mind while sitting in a crowded bus stalled in the Ethiopian highlands and in a hotel room in Bangkok.

I waded easily downstream, casting as I went. Two feet of water flowed over a bottom of gravel and marl. A dragonflyalighted on my hand, and the sun glinted off the single green-blue thread outlining its jet-black wings—another detail to deposit in the memory bank. Here are some more from downstream: the whistle of a meadowlark, sprays of daisies on a grassy island, and a moss-lined brook carving through a meadow en route to the river.

I caught a small rainbow trout hiding behind a submerged log. Nothing to speak of, really, but it was a beautiful, feisty fish just the same. And I don’t know what I caught it with—something white and brown. In general, I have the same approach to fly patterns as I have to baseball statistics—a basic understanding of what and who produces with some consistency is good enough for me. The late Harry Middleton put it best: “Among average fly-fishermen like me, too much thought about mechanics and angling technology leads to trouble and fatigue, and it tends to dull the uncluttered enjoyment of just fishing.”

Those usual worries turned out to be a bit heavier than I had thought. And they seemed to press harder between my shoulder blades as I made my way downstream. I stopped in a wider stretch of the river and let my muscle memory take over, casting to both banks as I estimated the effects of my father’s Alzheimer’s on the family and calculated the money I needed to move the next month.

The fly drifted through the dark seam under a fallen cedar, and a steady tug on the line pulled me back to the river. I steered the fish away from the bank and slowly reeled it in: a brown trout, just shorter than the cork grip of my fishingrod, released for another day.

As for the title of this brief essay, it comes from a passage in “Home-Coming,” an essay by E.B. White: “It was theNarramissic that once received as fine a lyrical tribute was ever paid to a river—a line in a poem by a schoolboy, who wroteof it, ‘It flows through Orland every day.’ I never cross that mild stream without thinking of his testimonial to the constancy, the dependability of small, familiar rivers.”

I’m hard-pressed to imagine more dependable waters than the blue ribbon stretches of the Platte.