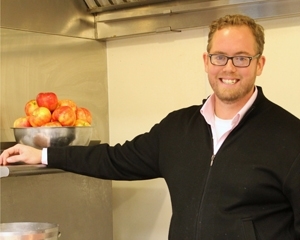 Like the fruits he’s using to create new flavors, Chris Dettmar is Michigan made; locally grown. He was born near Detroit, raised in Ann Arbor, and went to school at Northern Michigan University in Marquette.  He married a Petoskey native. Though he honed his skills as a chef at some of the best restaurants in the country, his most  recent position was at the Restaurant  at Meadowood in the Napa Valley, which recently earned a three-star ranking from the Michelin guide. (He also won “Battle Oatmeal” on the TV Show “Iron Chef” last year.) He has now returned to Northern Michigan to become the new culinary director at American Spoon Foods.

And he hit the ground running.

Dettmar came on board at American Spoon on a Monday at the beginning of October. On Tuesday, he drove to Bill’s Farm Market in Petoskey, brought back a bushel of Honeycrisp apples, and started tinkering. In a matter of hours, he had created a unique Honeycrisp Conserve spiced with star anise and white pepper. Two other creations followed shortly afterward. The three new limited edition products are already on American Spoon store shelves and in the new Spoon catalogue.  MyNorth took the new flavors to several venues to give a variety of Northern Michigan food lovers tastes of Dettmar’s inventions. The words most often used: “elegant”, “unusual”, “refreshing” and “luscious”.

MyNorth caught up with Dettmer in American Spoon’s R and D test kitchen on Clarion Road as the first snow of the season began to fall in Petoskey.

MyNorth: What are some of the things that you would say defined your style of cooking at the Restaurant at Meadowood in Napa?

Chris Dettmer: Our kind of palette and sense of cuisine was more eastern, taking some hints from Japan and the finesse of Japanese cuisine, but using all the beautiful California ingredients. It became a little more elegant and a little more refined. One of the things I’m most proud of that we developed is the garden and on-site culinary additions: we had beehives. We had an orchard. We had about two acres. We told them what to plant, and they’d put it in. We’d come down before 4 p.m., before service started, and get all the little garnish herbs and leeks and beautiful little carrots – an inch- long carrot, an inch-long radish. We were using produce that had never been refrigerated. It’s coming straight from the ground, washed off, and on to somebody’s plate. It’s a luxury not too many restaurants have the ability to do.

MyNorth:  What are some signature dishes you developed?
Chris Dettmer: One dish people loved was sweetbread tortellini with lobster trail poached in sauterne butter with black truffle, chanterelle mushrooms, turnips and spinach, and a little truffle broth. It’s a beautiful dish. Texturally, it works. The flavor combinations are so earthy, with the sweetbreads and the truffles and chanterelles, and then the sweetness of the sauterne and the lobster.  lt was absolutely beautiful. We were sitting around, talking about the menu, and where we wanted to go, moving in to the spring. We were, like,  “Why do we have this on our menu? It’s been on here for four months! Why are we relying on this dish? People love it; it’s a great dish.  But it’s not something we want to use as a crutch. Let’s push ourselves. Let’s come up with something even better than this.”  That was kind of our philosophy: never resting on something that’s successful. Otherwise, you’re not going to have other extremely successful dishes.

MyNorth:  How did you get back to Michigan?

Chris Dettmer: While I was at Meadowood, my wife and I had our first child, Elijah. He was about a year and three months old, and I was obviously working 90 hours a week. This was my life. If I was lucky, I had a day off. I wasn’t seeing my wife and I wasn’t seeing my son. For her, and for Eli, it wasn’t fair. My wife is a Petoskey native, and went to school with Noah Marshall-Rashid, who runs American Spoon along with his father, Justin Rashid. She ran in to Noah when she was on vacation here in Petoskey. They both happened to be at Legg’s Inn in Cross Village, and they started talking. I had tucked away his e-mail address. I e-mailed him, and a couple of weeks later, I was on a plane here to meet everybody.

Chris Dettmer:  My title is Culinary Director. It has an umbrella for several things. We have the production people up here, and I work with them on quality control and taste from a food/science perspective. But mostly what I do is create: coming up with new cool flavors. As a chef, you’re always creating new things, but this is a new challenge. We’re mainly dealing with upper Michigan fruits – which is new for me – and it’s really a challenge from a creative standpoint.

MyNorth: You are continuing the Spoon tradition of using pretty much all local Northern Michigan ingredients…

Chris Dettmer: We really try. For instance, I really wanted to do something with quince. But the only quince farm I could find was by Kalamazoo. That was too far away for us. We try to stick with Northern Michigan. For instance, we’re getting our cranberries for the Spiced Cranberry Chutney from the eastern shore near Cheboygan. We’re looking for wild fruits like thimbleberries and elderbierres in the U.P. We try to stick with as local as possible, within about 100 miles of Petoskey.

Chris Dettmer:  It’s closed for the season right now, but we’re working on how I want things to run next year. It’s not going to be a Michelin three-star destination as of yet!   But just using a bit more technique. We have this ethic of using all our local farmers for our preserves.  Well, I want to really push that for the café as well, and only start sourcing things from surrounding farmers. My wife who is from Petoskey:  her family has a centennial farm in Alanson. We’re going to plant some things there and even raise some American Spoon pigs!

MyNorth: So you’ll feature local farms on the menu?

Chris Dettmer: I’m familiar with Pond Hill, Bluff gardens, and other farms in the area. There is that foundation for culinary and agriculture-based businesses up here.  What I would like to do is help elevate what’s going on up here, and bring some knowledge that isn’t present up here yet into the foundation of agriculture.  So, hopefully, we’re going to do some exciting things.

MyNorth: You could have gotten a chef or culinary director job almost anywhere. Why American Spoon?

Chris Dettmer:  Obviously, I’m coming from one of the top  restaurants in the world. What drew me to American Spoon? I share the same philosophy of respecting fresh ingredients and respecting farmers. They’re aren’t too many places like this – not even many restaurants, even – that have that philosophy and that ethic, let alone an artisanal food company. That is a rare thing.

MyNorth: So tell me about these new creations.

Chris Dettmer: Actually, it all started with the Honeycrisp Conserve.  When I first got here, as a method for me to get my feet wet and as a method for us to all get involved, we went up to  Bill’s Farm market and bought some Honeycrisp apples and a couple of other things. Justin was going to show me about the preserving process. This was kind of born of that moment. There was some star anise here in the R and D kitchen.  For me, the anise is very similar to cinnamon, in the same family of flavor, so it was taking the traditional cinnamon apple and doing it in a more interesting way, with a little white pepper to balance the sweetness with a little bit of spice. There’s candied lemon zest in there, too. In the development process, I took a jar home and my wife was making pork tenderloin. We put them together. It was off-the- charts good. These apples were grown 30 miles south of here at Friske Orchard. It’s allowing the characteristics of the apple to come through but it’s enhanced with the spices.

MyNorth: How did you develop the Vanilla Pear Conserve?

Chris Dettmer: I wanted something elegant and subtle. This is made with Bosc Pears, also from Friske’s. I added lemon and Vanilla Bean from Madascar, which is actually orchid seed pods – and though it’s called “Bourbon Vanilla”, there’s no booze! It can be served in a variety of ways, including as a desert with blue cheese or triple crème brie.

MyNorth: And the Spiced Cranberry Chutney?

Chris Dettmer: My wife’s family lives on a cranberry bog near the Cut River.  I came up with the idea of mixing cranberries with lime juice,  ginger, cardamom, cumin and fenugreek.   (A friend tasted it and called it “Thanksgiving in Mumbai!”)  Justin got excited about it and ordered 1200 pounds of cranberries grown up here in Northern Michigan. There are no onions in here to get in the way of the cranberry’s fruitiness. The flavors are really clean and bright. Delicious with turkey and other holiday dishes.
MyNorth: What’s next out of Spoon’s R and D kitchen?
Chris Dettmer: Having this small artisanal label with limited edition releases has offered me the opportunity to do things that are new and unusual. In the spring, we’ll do something different. For me, spiced fruits scream fall. In the spring, maybe we’ll do something more floral. I’m also working right now on something I’d like to get out by Christmas: a dulce de leche sauce made with Shetler’s family dairy’s milk.

American Spoon;s three new flavors,  Honeycrisp Conserve, Vanilla Pear Conserve, and Spice Cranberry Chutney, are $12.95  a jar.  They are Limited Edition Releases, which means there are only 500 jars of each.  Available at spoon.com or at American Spoon stores.