Somi to Perform at the Dennos Museum Center in Traverse City 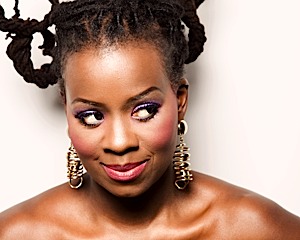 Somi, the newest rising star in the world music jazz scene, will appear at the Milliken Auditorium of Dennos Museum Center at Northwestern Michigan College in Traverse City on Friday, October 29, 2010 The concert begins at 8pm is presented in collaboration with the Wharton Center at Michigan State University.

"Imagine the earthy gutsiness of Nina Simone blended with the vocal beauty of Dianne Reeves. Such is Somi." – Jazz Times Magazine

Somi is a daughter of the New African world. Born in Illinois to East African parents of Rwandese and Ugandan heritage, Somi and her six siblings began to shuffle through the life of a diplomat scientist-come-university professor’s family, thus exposing Somi to stories and music from all over the world.  “I want my music to put people in a place of introspective bliss and inspiration. The same place I am when I write. I want people to be touched by music and never be afraid to fully embrace who they are.”

Often compared to the great voices of Nina Simone, Miriam Makeba, Dianne Revees, and Sarah Vaughan, Somi’s music relentlessly evokes all that is pure, honest, and true. Listening to her exhale a belly full of stories on life, love, and liberation, one is involuntarily reminded of their own private moments of passion. Throughout Somi’s song writing, her voice soars over, through, and in between nuances of an incomparable musicianship that organically fuses jazz, classic soul, African folk, and rare urban grooves.

Having lived in Zambia, Kenya, and Tanzania, Somi was the featured vocalist in the African Globe Theater production of Drums under the African Sky upon moving to New York City. The early spot led to collaborations with Amel Larrieux, Tsidii Le Loka, Roy Hargrove, Lionel Loueke and Lonnie Plaxico. She gained more attention after being featured in Source Magazine alongside Mos Def and other lyricists involved in a police anti-brutality project entitled Hip-Hop for Respect and in 2005 she shared a stage with Cassandra Wilson at the Blue Note jazz club’s New Year’s Eve celebration.

Emerging as a popular headliner and firm critical favorite, she has performed at Joe’s Pub, B.B.King’s, and The Blue Note in New York City, the Atlanta Jazz Festival, and Chicago’s famed South Shore Jazz Fest, among many other international venues. Somi has been profiled in numerous media including CNN International, BBC World, National Public Radio, TV 5 Monde, VH1, MTV, and BET. somimusic.com.

Tickets are $25 advance, $28 at the door and $22 for museum members. Tickets may be purchased on line at dennosmuseum.org or by calling the box office at 231-995-1553. The Dennos Museum Center’s galleries are open one hour before the concert for ticket holders and for a reception with the performers following the concert.

This concert season is made possible at the Dennos Museum Center with support from the Robert T and Ruth Haidt Trust, the National Endowment for the Arts, a federal agency, the Michigan Council for the Arts and Cultural Affairs, The Michigan Humanities Council, the Traverse City Area Chamber of Commerce, the Begonia Foundation, The Michigan Humanities Council with media support from WNMC 90.7 and TV 29&8. Housing for the performers is provided by the Cambria Suites and Days Inn.

The Dennos Museum Center is open daily 10 AM to 5 PM, Thursday’s until 8 PM and Sundays 1-5 PM. Admission is $6.00 adults, $4.00 for children and free to museum members. For more information on the Museum and its programs, go to dennosmuseum.org or call 231-995-1055. The Dennos Museum Center is located at 1701 East Front Street, Traverse City, MI 49686, at the entrance to the campus of Northwestern Michigan College.

Make an evening of the Somi concert! Find the perfect restaurant in the MyNorth Restaurant Guide
X
X