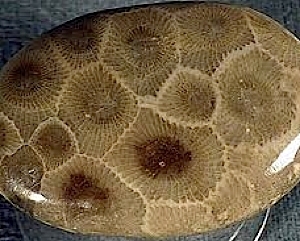 These cool looking Petoskey stones, found on Great Lakes beaches, are actually fossilized ancient coral that lived 350 million years ago—before dinosaurs even—when Michigan was covered in a warm sea (yep, you’d have been treading water if you lived in Michigan then!).

Coral is a kind of flower-animal—the coral that eventually turned into Petoskey stones was red and had six-sided tentacles that sucked up plankton to feed itself. Other creatures like clams and trilobites also lived in this sea.

After the sea dried up, the coral hardened, or fossilized. About 2 million years later, huge sheets of ice called glaciers pushed through Northern Michigan and scattered the fossilized coral everywhere. It’s been pretty much waiting in Lake Michigan or on the beach ever since—for rock hunters like you to discover!

Where should I look?

Petoskey stones are abundant along the Lake Michigan coast from Leelanau County to Petoskey—the stone actually takes its name from the city of Petoskey.

When should I look?

You can find Petoskey stones most any time of year, but after a storm is an especially good time to look since they’re often washed onshore by big waves.

How do you identify a Petoskey stone?

Petoskey stones are gray and covered in little circles in a honeycomb pattern. If you look very closely at the circles you’ll see that they actually have six sides, just like the coral’s tentacles had when it was living under that ancient sea. Sometimes, if you look very closely, you can see flecks of red leftover from the red-colored coral.

Are Petoskey stones hard to find?

When they are dry, Petoskeys blend in with the other stones on the beach and their circle pattern is very faint. When the stones are wet, however, the circles pop out and are easier to see. One tip is to look for them in the shallows at the water’s edge. If you think you’ve spotted a dry Petoskey, dip it in the water to see if it has circles.

Can I polish my Petoskey stone?

Yes, by hand—unless you really know what you are doing, the stones are too soft to be put into a rock tumbler. Rub your stone with 220-, 400- and 600-grit sandpaper, in that order. During the sanding process rinse the stone often in clean water, then dry it. After your stone is smooth you can rub it with mineral oil to make the circles stand out—or just keep it in a glass jar filled with water.

Learn how to polish a Petoskey stone in this MyNorth Media video! Click here for instructions.