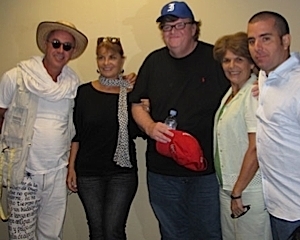 One more follow-up to this year’s Traverse City Film Festival:

If you attended the panel with the filmmakers from Havana or any of their film presentations, you heard their pleas for help. They have a hard time getting their films made in a very poor, isolated country. We did an amazing and historic thing by bringing them and their films to Traverse City, and they have returned home more committed than ever to make movies and have them shown in the United States.

But because Cuba is a Third World country that still suffers from a nonsensical embargo by our government, it’s very hard for them to fund the movies they’d like to make. During that panel on Cuban film, someone suggested we pass the hat for them. I asked the audience if we should do that and there was a boisterous round of applause. So I said we’ll raise the money for them on our web site. And my foundation will match whatever we raise.

Two of the filmmakers, Juan Carlos Cremata Malberti ("Viva Cuba") and Ian Padron ("Dreaming in Blue"), said that they only need $10,000 to help make their movies. So, with the consent of the audience, we instantly announced the establishment of the "TCFF Cuban Film Fund." For every dollar you donate, my foundation will give a dollar. And both filmmakers have agreed to make "The People of Traverse City" the co-producers of their films!

We have set up a completely legal (but embargo-busting) way for all of us to donate to them. You can give any amount, from $1 to $10 to $100 or more, by clicking here. And I will personally guarantee that your donation will not be held up at Miami Homeland Security, but will in fact will go to support these two fine filmmakers.

Let’s show our Cuban friends who we are as Americans, that we believe in the free exchange of art and culture, that we oppose all forms of censorship, and we are willing to act on those beliefs. The more we set an example as a beacon of freedom, the more it helps the artists and citizens of Cuba to express themselves. They are our neighbors. And now, at least, four of them are our friends. Please give what you can, and I’ll match it. It’s a rare chance to double your money and do something as an individual to help bring about a more peaceful world. Join me in doing what you can. Let’s hit our goal of $10,000 by Labor Day.

We are not making a political statement. We are making friends of former enemies and we are saying that there is no filmmaker who should face either censorship at home or prohibitions abroad when it comes to distributing films. If I want to watch a film from Cuba, that’s my First Amendment right—and nobody has the right, in a free country, to prohibit art because it comes from a country "we don’t like." That’s just nuts.

Join me now in making this first Michigan-Cuban co-production, all in the name of peace—and "Just Great Movies."

Donate Now Funds will go to pay for production and post production costs outside Cuba or production facilities in Miami, Spain or Canada where the Cuban filmmakers will finish their films.

Photo(s) by Courtesy of TCFF