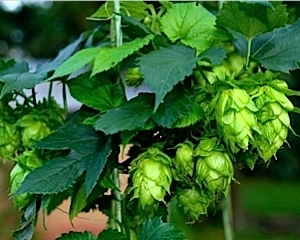 July 5, 2010, finds Old Mission Peninsula, near Traverse City, in the throes and organized chaos of the sweet cherry harvest. Picking crews cluster in every orchard. Tractors wheel along dusty road-shoulders hauling white bins fi lled with the burgandy-hued orbs. At sharp bends on Center Road, spilled cherries litter the pavement—evidence of a tractor driver in too big a hurry. Every driveway, it seems, posts a sign that says, “Washed Sweet Cherries,” and at one fruit stand, a teen boy stands fl agging customers down, waving people in like, say, a guy would at an H&R Block on April 14th.

This is ground zero cherry nation, the evidence is plain. But despite today’s cherry imperative, three men—two of themcherry farmers—agree to break from harvest and meet with me for lunch in Old Mission Tavern to discuss an entirely different crop they’ve been experimenting with for the past few years: hops, the fl ower bud that fl avors beer. The trio is comprised of Rob Manigold and Steve Sobkowski, whose families have farmed Old Mission for multiple generations, and Dan Wiesen, a farmer and builder from Leelanau County. All are 50-something and share the sun deepened skin of men who work outdoors. The three are among perhaps 10 farmers, including a few organic growers, seriously experimenting with hops Up North.

Though cherries will continue to be the ag powerhouse of the region for years to come, being so reliant on a single varietyof fruit means there’s nothing to buffer years of bad harvest or low price, and that vulnerability has convinced some farmers to diversify. “As far as how hops got started on Old Mission, I chalk it up to too many farmers getting together in the winter and drinking too much wine and surfi ng the Internet,” Manigold says. He laughs, the joke lighting up his warm brown eyes. But, like any joke, there’s a measure of truth. Farmers have diversified with grapes and wine here, and it’s worked well. They wondered what else might be possible.

Farmers remembered Dr. Joanne Westphal, a professor from Michigan State University, who came up in the early 2000’s todiscuss other crops that might grow here, and hops was on the list. And when farmers did hit the Internet, they discovered encouraging information. Chief among the fi ndings: hops do well along the 45th parallel, which cuts through Old Mission Peninsula; hops tolerate cold; and deer don’t eat hops. “That’s a big one,” Wiesen says.

The ignition spark for Old Mission farmers came when NPR and the Wall Street Journal both mentioned a hops shortage. Sobkowski’s wife raised the issue with Right Brew Brewery, and a former partner of Manigold’s and Sobkowski’s discussed a long-term contract with the brewery—if they’d agree to purchase a given volume of hops, the three men would provide them. Deal struck. Hops planted the following spring.

Oddly enough, Wiesen and his partners in Leelanau were getting going on hops at the same time, but neither grower knew of the others’ efforts. “We had a piece of ground that was too cold and low for a lot of crops, and my brother asked me what we were going to do with it,” Wiesen says. They conducted some research and decided to give hops a try.

Lunch wraps up and Manigold has to speed back to his orchard, but Wiesen and Sobkowski agree to take me on an Old Mission hops tour. First stop is a hops yard just being built—built, not just planted, because the necessary trellis system is a full on construction project. We pull up to the site and fi nd Gary Riggs, a jack of all trades for farmers on Old Mission, and three crewmen putting the fi nishing touches on the fi ve-acre yard. A grid of poles, each 18 feet high, rises from the freshly tilled, destoned soil. Riggs plants 65 poles to an acre, then strings them together with 200,000 psi tensile strength wire for support. Next will come the hops rhizomes, about 1,000 to an acre.