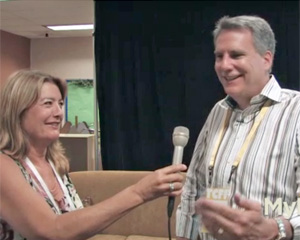 Mary Ellen Geist caught up with Clark Bunting, President of Discovery Studios and executive producer of the documentary film, Cane Toads, after a showing of the film at the 2010 Traverse City Film Festival. Cane Toads is a serious but often quirky 3-D film documentary by filmmaker Mark Lewis about giant toads set loose in Australia and wreaking environmental havoc. The film debuted at Sundance Film Festival to strong review. Bunting, Traverse City summer resident, knew the film would work and if he put his clout behind the project.

In this video interview, Bunting talks about why they made an environmental documentary filled with irony and humor and shot in 3-D, with toads often leaping off the screen toward the audience. He discusses the challenges of making and distributing a documentary film and how pleased they were with the engaged and appreciative Traverse City film audience.

MyNorth’s Elizabeth Edwards blogs about the sellout performance of Cane Toads that was accompanied by appearances by Clark Bunting and Mark Lewis.
Jeff Smith gives his take on the Cane Toads evening in a MyNorth blog.
X
X