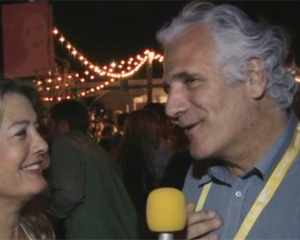 Everyone who saw the quirky, often funny and powerful documentary Cane Toads: The Conquest at the 2010 Traverse City Film Festival will be happy to hear writer/director Mark Lewis say that no toads were hurt or killed in the making of this moving. Those toads crushed by cars or stabbed were actually already dead and frozen. The real toads were the ones popping, literally, out of the screen in the first independent 3-D movie ever made, a technology Mark Lewis describes as “toys for boys.”

Lewis worked with Executive Producer Clark Bunting, president of Discovery Studios, to tell the poignant, often bizarre and quirky tale of the South American cane toad which was introduced to Australia in 1935 in an attempt to control the greyback cane beetle. Unfortunately, the toads were disinclined eat the beetles. Instead, they set about doing what cane toads do best —multiplying, migrating and thriving. Seventy-five years later, it seems nothing will stop the march of the Toad. Science and genetic mutation have failed, as has physical aggression. Fences and traps have proved ineffectual, as have natural predators and topographic barriers. No other species has occupied a nation’s consciousness like this toad, which has achieved both criminal and cult status.

Cane Toads: The Conquest explores the history, the science, the human conflict and the bizarre culture surrounding this notorious environmental blunder. Director Mark Lewis injects his trademark irreverence and humor into a story filled with engaging characters and incredible first hand accounts. This is a truly poignant environmental cautionary tale on the issue of invasive species and human folly. As the world wrestles with the idea that we have irretrievably altered our own ecosystem, these bulbous creatures may be the ultimate metaphor for the inevitable path upon which we have set ourselves.

MyNorth’s Elizabeth Edwards blogs about the sellout performance of Cane Toads that was accompanied by appearances by Clark Bunting and Mark Lewis.
Jeff Smith gives his take on the Cane Toads evening in a MyNorth blog.
X
X