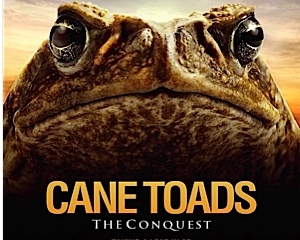 How could the formula miss? A 3-D film documentary, called Cane Toads, about giant toads set loose in Australia wreaking environmental havoc. But the movie is produced with attitude—a curious blend of quirk, irony and humor, and yet is somehow serious too. Plus the filmmaker shot it in 3-D, with lots of toad-level views. Clark Bunting, Traverse City summer resident and president Discovery Studios, knew it would work and put his clout behind the project, signing on as an executive producer and encouraging filmmaker Mark Lewis to push ahead.  The film debuted at Sundance Film Festival to strong reviews and will screen at the Traverse City Film Festival (July 27-August 1), where Lewis and Bunting will be in the house.

Re the unexpected attitude: “Particularly in the environmental genre, if you have finger wagging, the only sound you’ll hear is clicking as people go to check out ESPN,” Bunting says. “Using humor, you can have an editorial arc where the story is not threatening, it appeals to people.” The upshot: people stay for the entertainment, and get the important message along the way. “I’m hoping this will be a cult classic,” Bunting says.

MyNorth’s Elizabeth Edwards blogs about the sellout performance of Cane Toads that was accompanied by appearances by Bunting and Lewis.
Jeff Smith gives his take on the evening in a MyNorth blog.
Find the complete schedule for the Traverse City Film Festival, film descriptions, special film events and more on the MyNorth Film page.
X
X