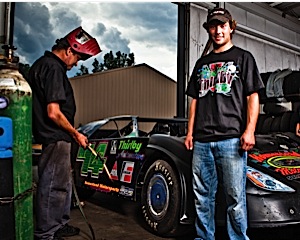 Ask dirt-track racecar driver Brandon Thirlby to map out a typical day in the thick of summer’s race season, and he pauses.

“Well, the day really begins the night before, about 11, when you are done racing.” That’s when, with car engines silent, stadium lights out, and crowd gone, Thirlby and his two-man team climb into the semi-cab and hit the road, pulling a double-trailered rig on to the next race—one trailer for the racecar and one for the team.

They drive till about three or four in the morning, find a place to park, and sleep till noon. “We like to get at least halfwayto the next race,” Thirlby says. Then, up and around, they finish the trip, arrive at the track—it could be a big fancy place that seats 250,000, has Jumbotrons, viewing suites and a flawlessly groomed track, or it could be a backwoods set of bleachers that seats a few thousand beside a pockmarked dirt oval, a place where you can’t even tell if there’s a town around.

About 6 p.m. or so, Thirlby pulls his racecar out on the track to run time trials, hoping to qualify for one of that night’s 20 or so spots in the lineup. If he qualifies, he races, but at this point in his career, he rarely wins—well, never wins. Then, race over, Thirlby and his team, gypsies of the dirt track circuit, start their workday again, hitting the highway in the middle of the night.

Anyone who has ever bought even a car fuse around Traverse City knows the name Thirlby, attached, as it is, to a set of nine automotive shops clustered in and around the Cherry Capital. Those who follow racing know the name even more. Brandon represents the third generation of Thirlby racers—racers of both cars and boats. His grandfather Ed Sr. raced, his dad Ed raced, his Uncle Mike races. And growing up, racing came naturally to Brandon. Go-Karts, bicycles, snowmobiles, even paddleboats—mostly against his brother Collin. “It was pretty much anything we could get our hands on,” he says.

Thirlby first built his racing name on water, not land, and he got an early start. By 11, he was already racing in a professional category. By his senior year in high school he was racing hydroplanes against guys twice his age and was considered the best hydroplane racer around. Now, at 22, Thirlby’s hydroplane résumé includes 10 national championships, one world championship and more than 100 U.S. Title Series podium finishes. He’s also a two-time inductee into the American Power Boat Association Hall of Championships.

Then why, with so much success in boats, is Thirlby phasing down liquid and phasing in dirt? “Boat racing is fun, and I’ll never be completely out of it,” Thirlby says. “But it definitely doesn’t pay the bills.”

As clean as a China dish, metal wiped to a gleaming polish, the motor is a massive 800 horsepower Malcuit. The engine is pretty much maintenance free—"just change the oil and you’re good to go." —Unless you crash it.

By comparison, even though dirt track racing doesn’t share the fame and mega-dollars of NASCAR’s asphalt circuit, top racers can still make upwards of a million dollars a year with winnings and endorsements added in. Plus, even mid-pack racers get paid. “Some races you get $1,000 just for showing up, not even racing,” he says. That is, say you don’t qualify in the time trial—you still get the $1,000 (“that’s called show-up money”). If you qualify to race, you get more money (“that’s called start money”). The system helps people like Thirlby make a career out of dirt track.

Thirlby first made his switch to cars after his dad had a heart attack in 2006 and had to retire from racing. Thirlby raced two events that season and then, the very next season, 2007, he won his first car race at Cherry Speedway, near Fife Lake. “There were a lot of surprised people, especially some veterans,” Thirlby says, referring to guys he had watched race for years as a kid and beat that night. “I was in front the whole race and just kept waiting for somebody to try to pass me.” But nobody did.

In 2008 he won two more races Up North, and in 2009, he made the jump to the national circuit. Thirlby won nothing in 2009, but that doesn’t faze him. “Right now we’re just trying to qualify, not to win—it’ll probably be a couple of years before we get to that point.”