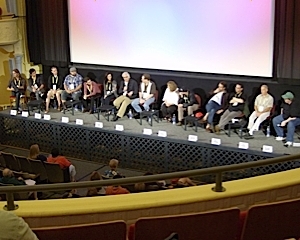 "Caught a big chunk of the documentary makers panel discussion Saturday morning, led, of course by Michael Moore, the most commercially successful documentary maker of all time, with five of the top 10 grossing documentaries to his credit. As my photo reveals, there were many documentary makers on the stage, so as you might imagine, the topics wandered a bit, but was an intimate look into the lives of documentary makers and their views. For me, one of the most interesting dialogs…. Continued….