Born to Be Wild: Centenarian Lou Batori and Wife, Judith, Hit the Highway 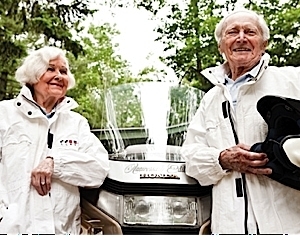 Every summer for the 25 years that I’ve lived across the street from Lou and Judith Batori they’ve motored out of the driveway in Glen Arbor, he at the helm of their Honda Gold Wing, she in the sidecar—sporting a foxy white driving suit—for a cross-country trip.

What makes this story exceptional is that Lou was 75 when we became neighbors. You do the math. I caught up with my energetic friends (Lou still bicycles and downhill skis) six weeks before Lou’s 100th birthday on July 31, and several days before the couple left on the Gold Wing for the Retreads International Rally in Hickory, North Carolina. And BTW, Judith is 91.

Last summer everyone on our street held their breath as you two headed out on two different cross-country motorcycle excursions.

Lou: We took off to go to Bellingham, Washington, to see my cousin who lives there. On the way, we stopped to see friends in Wyoming. They talked us into putting our motorcycle in the back of their truck and driving back to Glen Arbor with them. After we got home we decided we really did want to go to Washington after all, so we headed out over Labor Day Weekend.

You had canceled your trip this year but then decided to go. What changed your mind?

Lou: We thought we were getting too old, you know, this and that aches.

Judith: When I got up this morning I happened to see the pair of tennis shoes I ride in. I took it as a sign. I put a piece of evergreen in them, placed them next to Lou’s breakfast spot with a note that said: What are we waiting for, let’s roll.

How do you two communicate when you’re traveling?

Lou: We have intercoms in our helmets. We talk more then than we normally do.

Judith: It’s exciting passing things back and forth—cheese and crackers, bottles of water—because of the Venturi effect
that’s when …

Lou: … [that’s] the pressurized air mass between the sidecar and the motorcycle.

Judith: He has to be ready to grab it or whoosh. We call it very fast food.

Lou: I consider it very serious. It demands 100 percent attention. You are very vulnerable to injury on a motorcycle. I don’t drive slowly but I do drive conservatively.

Judith: Really, he’s amazing on these trips. Conservative, clever, wise. He has everything planned out to a detail months ahead of time.

You have to pack tightly for your trips. Do you include an emergency kit?

Lou: Yes. A bottle of vodka.

Lou, you have some great advice for aging well, care to share it with others?

Lou: There are three ingredients: Get yourself a good wife; never ever drink anything but quality booze; pick your parents carefully.

Postscript: After a tire blowout in Ohio, the Batorys made it to the rally—where Lou was presented with a birthday cake by 350 of his Retread friends. Less than a week after they pulled out of Glen Arbor, they were back, safe and sound, each enjoying a glass of wine on their patio.