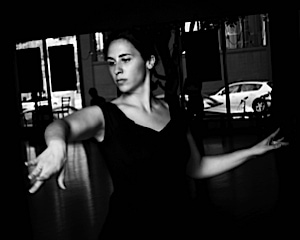 Have you ever wanted to literally sweep someone off his or her feet on the dance floor? It turns out lots of us are trying to accomplish that task these days. The success of shows like Dancing With the Stars is prompting more amateurs than ever to try to learn the art of ballroom dancing. And now—just in time—Zoe Marshall-Rashid has come back home to Northern Michigan to teach even the clumsiest among us to try their hand (and feet) at this extremely popular activity. MyNorth talked with Zoe right before she started one of her salsa classes at Crooked Tree Arts Center in Petoskey.

MyNorth: You grew up in Petoskey. And you’re the daughter of Justin Rashid and Kate Marshall who started American Spoon Foods. What some people don’t know is that your parents began their professional lives in theater.  How did that influence you?

Zoe Marshall-Rashid: Well, I don’t even know that there’s a story in how I got into theater, because it was just something that was always around. My Dad would read us Shakespeare when we were kids. It was just always something that seemed like it was a logical thing to do when I got to college, when I was able to explore the arts. When I went to Petoskey High School, there really wasn’t much of a theater department…. the music department ran the musicals, so I would do those every year. But it was mostly about singing, and less about anything else. So when I went to Kalamazoo College, I was terrified about auditioning for a play. I thought I knew less than anyone else there, I thought I was going into it with all these people who knew about theater, and I thought I didn’t know anything.  But it turned out that the man who ran the theater department wrote a book on Andrei Serban, who was one of the directors my parents worked with when they were in New York, so there was this crazy connection. And he and I really connected right off the bat. His name is Ed Menta, and his book is called The Magic World Behind the Curtain.

MyNorth:  So where did dancing come in?

Zoe Marshall-Rashid: I danced when I was very little.  I took dance classes with Jody Adgate—jazz classes—and with  Diane Heinzelman, who was the ballet teacher here at Crooked Tree. I stopped. I’m not really sure why I stopped. I tried to pick it up again in Middle School. I was pretty discouraged and so I quit.

MyNorth: So you really found your passion for dance when you were older?

Zoe Marshall-Rashid: It was something I had always regretted giving up. I always thought: “Man, if I had been a dancer, I’d be happy!”  So when I was in college, I studied abroad in Oaxaca, Mexico, and the school offers to pay for an extracurricular activity, so I chose to take Salsa dancing along with a number of classmates. I just really fell in love with it.  We would go to dance class every single day, and then, every single night, we’d go out to salsa clubs and go dancing with our instructors. I thought: “ I’m going to do this forever. I love this!”  I tried to do it in Kalamazoo when I got back, but there weren’t a lot of opportunities. After I graduated, I moved to Chicago to do theatre and I decided I wanted to focus on casting and arts administration. So while I was doing that, I also started taking salsa classes and I started taking Argentine tango. When I was doing casting, I realized it was a difficult thing and it was incredibly competitive, but even when I was really doing what I wanted to be doing, most of the time I was just sitting behind a desk. And as much as I enjoyed the audition process and I did enjoy being a casting director, that was only about ten percent of the time.

MyNorth: So you decided to change directions a bit….

Zoe Marshall-Rashid: I had done two summers working at a musical theater camp as a counselor, and I realized I like working with kids and I like teaching.  I went on a vacation, and I had this dance thing in the back of my head that had always been there. I was looking for some sort of intensive dance course I could do… just to go away for a month, to dance and re-evaluate and figure out what I wanted to do.  I kept searching, and I thought maybe I could find some sort of teacher training program. At first I couldn’t find anything like that, but after Google searching the same things over and over, I finally found the website for this Ballroom Dance Teacher’s College in San Francisco.  It was weird I hadn’t found it sooner. The timing was perfect. I thought:  “Wow, this is exactly what I want to do.” They train you in all the dances.

MyNorth: So you just headed off to San Francisco?

Zoe Marshall-Rashid: I went in August. I spent two days on a train. I’d never been to San Francisco in my life.  I stayed in a hostel for two weeks until I found housing. I started the program at the end of August.

MyNorth: How does the program work?

Zoe Marshall-Rashid: It’s really focusing on breaking down the steps and teaching you how to teach. You have to learn all the theory for the dance, and they train you to take your certification exams. So you learn all of this language that only teachers really use, about how to break down steps. If you’re talking about footwork, for example, in Waltz:  “step one, heel, step two toe..” “ball .. heel.”  It’s all broken down based on the steps. You learn about alignments – things that   only teacher’s use. You have to be able to present that information to your class, and also to be able to dance all the figures in the syllabus.  Ballroom dance—unlike other kinds of dance—is broken up in this very sort of academic way. There’s a syllabus of figures for each dance. There are bronze figures and silver figures and gold figures. It’s all in a textbook, and that’ s how you do your certification. That’s how people are categorized for competition.

MyNorth: So you had to dance competitively to be trained to teach dancing?

Zoe Marshall-Rashid I am now trained for certification. To actually graduate from this program, you have to go through the training for all 17 American style dances, and then you teach a class with one of their instructors in the room. And then you also teach a private lesson. Then you dance an amalgamation of figures for two different dances and then you present theory for two other dances.

MyNorth:  So you enjoyed teaching classes from the beginning?

Zoe Marshall-Rashid:  I loved it. A lot of people do that program and do just four hours a week. I actually was doing 8 hours a week. I wanted to do more so I took private lessons. My coach David Estrada trained me in rhythm. Learning dancing for competition is a whole  different thing.  I competed at the San Francisco open and I won all my dances.  I want to be dancing like that every day!

MyNorth: So now you’re back home in Petoskey, teaching ballroom dancing at Crooked Tree. How’s it going so far?

Zoe Marshall-Rashid: Salsa seems to be the most popular so far. In July, I taught rumba and mambo and salsa and waltz.  In August, I’m teaching two levels of salsa and two levels of rumba.

MyNorth: What exactly IS ballroom dancing? Does it encompass all these dances?

MyNorth:  OK, so I’m a complete klutz. Do you believe anyone can learn to dance?

Zoe Marshall-Rashid: I really do. I’m not sure competing is for everyone, or that everyone should aspire to a particular level. But I do think everyone can learn to have fun on the dance floor and feel confident within a dance. There are people I’ve witnessed in classes I’ve taken where you come in on the first day and you’re like, “Oh my goodness, what is that person doing in a dance class?”  But they’re really excited about it. They’re like,  “I want to do this. I want to learn.” And by the end of it, they’re finding the beat and they’re having fun. That’s really what’s great about this kind of dancing. It’s for everyone.

Zoe Marshall-Rashid: The best thing about teaching is moments when you see people really making progress.

Zoe Marshall-Rashid: I always get nervous.  Maybe it’s the fear of not being able to live up to people’s expectations, and making sure everyone’s having a good time and getting what they want to be getting out of this class.

MyNorth: What are the biggest mistakes people make when they’re trying to learn to dance?

MyNorth: Are you having fun?

Zoe Marshall-Rashid:  Absolutely! Yes, this is what I want to do.

MyNorth: Did you see the movie Shall We Dance?

Zoe Marshall-Rashid: I heard the Japanese version was really great! (laughs)  Actually, I like almost any movie with dancing in it. Singing In The Rain. Dirty Dancing is totally one of my favorite movies.

MyNorth: What’s next for you?

Zoe Marshall-Rashid: Jose De Camps is the American rhythm champion right now, and I want to go to New York and take lessons with him.

MyNorth: If someone reads this and wants to take a class, but they’re scared of making a fool of themselves or they feel like they’re clumsy like me…. any advice? .

Zoe Marshall-Rashid: It’s an extremely low-pressure environment. Half the people in this class have never danced before, and are having a great time already even after just one or two classes.

MyNorth: What is the thrill of dancing? What makes you love it? Is it a Zen thing?