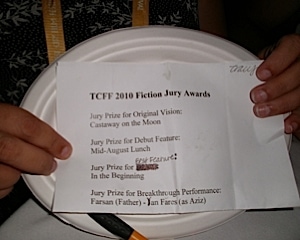 The 2010 Traverse City Film Festival came to a close with the awards ceremony and celebration held at the Park Place Hotel in Traverse City. Michael Moore announced the winners from a fabulous week of films and terrific juries who poured over each film in each category. Here are the winners!

The Most Dangerous Man in America

Castaway on the Moon

How to Fold a Flag

Smile ‘Til It Hurts: The Up With People Story

How to Save a Fish From Drowning– Kelly Neal (UK)

The Elephant in the Living Room

To entire group of short-film filmmakers and to Reel Injun

Will You Marry Us?