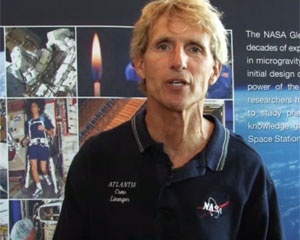 MyNorth.com caught up with former astronaut, Jerry Linenger as he mingled with the public along with four NASA technicians from the Glenn Research Center during the Hagerty Family Car Show, an event of the 2010 National Cherry Festival in Traverse City.

A resident of Leelanau County in Northern Michigan, Linenger often tells the story of looking at Earth from space and being overwhelmed by the breadth and beauty of the Great Lakes. He picked his home of the future from a spaceship.

Here, Linenger talks about his life as an astronaut while standing by the Boeing Lunar Rover (LRV) Prototype that was on display at the Hagerty Insurance building. The Lunar Roving Vehicle was developed in 1965 by the Boeing Aerospace Corporation to carry two astronauts, scientific equipment and lunar samples across the moon’s surface.

Jerry Linenger was born in Michigan, graduated from the U.S. Naval Academy and went on to receive a doctorate in medicine from Wayne State University School of Medicine. He joined his astronaut selection group in 1992 and went into space aboard the U.S. Space Shuttle Atlantis on January 12, 1997. He lived on the space station with two Russian cosmonauts, during which time he became the first American to conduct a spacewalk from a foreign space station in a non-American made spacesuit.

In this video, Linenger mentions the difficulties he and his Russian counterparts encountered in space, including the most severe fire ever aboard and orbiting spacecraft, failures of their onboard systems, a near collision, lost of electrical power and loss of altitude control.

Linenger retired from NASA and the U.S. Navy in 1998 and came to Leelanau County in Northern Michigan to raise his family.