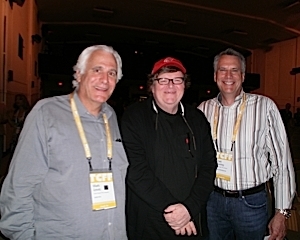 The Traverse City Film Festival’s Friday morning panel discussion brought together Michael Moore and four Cuban filmmakers in a wide ranging two-hour dialog that touched upon such hot button issues as U.S. prisoners at Guantanamo Bay, a CIA airplane bombing that killed the father of one of the panelists (Juan Carlos Cremata Malberti, pictured), the evolution of gay rights in Cuba, film censorship in Cuba versus film censorship in the United States and, of course, how to pay for film production. So, yes, a fine and provocative panel discussion. Continued…

Today marked Clark Bunting’s 25th anniversary with Discovery Channel. A quarter of a century after Bunting, Michigan born and MSU educated, walked into the Education Cable Network—now the Discovery Network—in 1985, Bunting is president of Discovery Channel. The anniversary coincided with a sold out showing of Cane Toads…Continued…

Friday at the Sixth Annual Traverse City Film Festival: Where do people go to burn the Midnight Oil?

Ever since Michael Moore launched the first Traverse City Film Festival six years ago, I have wondered: where do the filmmakers and film lovers from all over the world go to play late at night in Traverse City, after all the movies and interviews and obligatory social events are over? I found out tonight: for many of them, especially filmmakers from out of town, it’s the Park Place Hotel, on the Tenth Floor. Continued….

There is no question that the short shorts exhibited at Thursday night’s presentation of Short Fiction 1 are “just great films”. All selections revolved around the theme of relationships and, as such, even the comedies tended to be more serene in tone compared to many short shorts on the circuit. Continued….