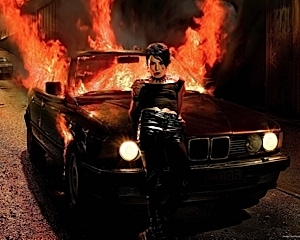 Click to get the 2011 Traverse City Film Festival Lineup!

Sometimes there’s a film that’s just right for its time and place, a perfect match for the spirit of its time. This alt-family comedy from director Lisa Cholodenko (“Laurel Canyon”) is just such a film — a classically crafted work that effortlessly taps the cultural zeitgeist to offer a portrait of a quintessentially modern family. Hard-working doctor Nic (Annette Bening)has been with her partner Jules (Julianne Moore) for almost twenty years. The couple has it all — a house in the suburbs, steady income, and two teenage kids, Laser (Josh Hutchinson) and college-bound Joni (Mia Wasikowska). Everything’s going smoothly for the family until Laser pressures his just-turned-eighteen sister into using her new legal standing to track down the identity of their biological father. The anonymous sperm donor turns out to be Paul (Mark Ruffalo), the hunky proprietor of a hip organic restaurant who’s more than a little curious to meet the kids he never knew he had. But as Paul enters into their lives, the family’s balance is thrown into disarray. A breakout hit at this year’s Sundance Film Festival, this rich, hilarious film is easily the best American indie of the year.

This thrilling neo-noir is the sequel to this year’s wildly successful "The Girl with the Dragon Tattoo" is based on the second in the bestselling "Millennium" trilogy of novels by Stieg Larsson. The titular girl, Lisbeth Salander, is many things: she’s tough, independent, sexy, anti-social, and smart. She’s also a wanted woman. After returning to Sweden to clandestinely aid her journalist partner Mikael Blomkvist on an investigation into a sex-trafficking investigation, Lisbeth becomes the target of a manhunt when her fingerprints are found on the weapon that has left two journalists dead. Lisbeth and Mikael set out to find the truth behind the murders, dodging the authorities and dispatching of some menacing bad guys along the way. Whether you’re a devoted reader and not, you’ll be glued to your seat for this labyrinthine journey into the criminal underbelly of Larsson’s Stockholm in this gritty and compelling thriller.

Director Sam Taylor Wood’s portrait of the artist as a smart, talented, but directionless young man who steals records and skips school in 1955 Liverpool provides a fascinating fictional look at John Lennon’s early path from boy to man to legend. Powerful performances from BAFTA nominated actresses Kristin Scott Thomas and Anne-Marie Duff, who play the auntwho raised him and the estranged mother who fought for his attention in his teen years, bring to life a crucial part of the journey that led to the creation of the greatest rock band of all time. From meeting a young Paul McCartney and starting up The Quarrymen as a refuge from his painful past, to falling in love for the first time, “Nowhere Boy” avoids the pitfalls of biopic nostalgia to reveal the emotional and musical birth of a legend.

The South American cane toad’s unstoppable journey across the Australian continent has long been the focus of great controversy and bizarre fascination. The cane toad was introduced to Australia in 1935 in an attempt to control the greyback cane beetle. Unfortunately, the toads were disinclined eat the beetles. Instead, they set about doing what cane toads do best —multiplying, migrating and thriving. 75 years later, in a country equipped with unprecedented scientific capabilities and unabated public will to battle the invasion, it seems nothing will stop the march of the Toad. Science andgenetic mutation have failed, so too has physical aggression. Fences and traps have proved ineffectual, as have natural predators and topographic barriers. No other species has occupied a nation’s consciousness like this toad, which has achieved both criminal and cult status. “Cane Toads: The Conquest” explores the history, the science, the human conflict and the bizarre culture surrounding this notorious environmental blunder. Director Mark Lewis injects his trademark irreverence and humor into the first independent 3D movie ever made, a story filled with engaging characters and incredible first hand accounts. This is a truly poignant environmental cautionary tale on the issue of invasive species and human folly. As the world wrestles with the idea that we have irretrievably altered our own ecosystem, these bulbous creatures may be the ultimate metaphor for the inevitable path upon which we have set ourselves. In Person: Director Mark Lewis, Executive Producer Clark Bunting

Disappointed that U2 had to cancel their East Lansing tour stop? Don’t sweat it! This year the TCFF will feature the first-ever live-action digital 3D film. “U2 3D” is a unique cinematic experience that places viewers within the pulsing energy of a stadium concert given by the world’s most popular band. Marrying innovative digital 3D imagery and multi-channel surround sound with the excitement of a live U2 concert — shot in South America during the final leg of their “Vertigo” tour — this film creates an immersive theatrical experience unlike any 3D or concert film that has come before. See and hear Bono, The Edge, Adam Clayton and Larry Mullen Jr. rock out to your favorite U2 hits including “Beautiful Day,” “With or Without You” and “Where the Streets Have No Name.” Ushering in a new dimension of filmmaking, “U2 3D” takes viewers on an extraordinary journey they will never forget. Print courtesy 3ality Digital and National Geographic Entertainment

Coming to the 2010 Film Festival from outside of Traverse City? Grab your hotel now or rent a cottage

Wang Quan’an’s latest masterpiece centers on Chinese civil war veteran Liu’s visit his elderly one-time love Yu’e after a lengthy break; the couple separated when Liu, a Nationalist soldier, fled to Taiwan. Their reunion proves uncomfortable for Yu’e and her family: her common-law husband Lu is also an ex-soldier who fought for the side of the Communist mainland,and their adult children with whom they share a home are unsettled by Liu’s presence. This engaging chamber piece with a quiet political undercurrent is elevated by a dry sense of humor and fleeting moments of lyricism.

Driven to despair by life’s failures, Kim aims to end it all by leaping off a bridge. But he can’t even get suicide right, and the non-swimmer ends up washed ashore on an island in the middle of the river, the city in sight but tantalizingly out ofreach. Slowly growing accustomed to his isolation, Kim becomes the Robinson Crusoe of his island. Meanwhile, in a high rise on the banks of the river, a shut-in happens upon Kim with her zoom lens, and the two isolated misfits discoverthe joy of less-than-instant messaging through notes left in bottles and messages scrawled in the sand. This must-see rom com will move you in ways you haven’t felt at the movies in years.

Aaron is a smart but sheltered incoming Ivy League freshman, pushed to pursue an engineering track by his controlling mother. Liberated by the newfound freedom of life away from the nest, Aaron decides to enroll in a drawing class, where he meets and falls for Linda, a 34-year-old former wild-child who has returned to school to straighten out her life.Linda invites Aaron to her place, and a bizarre love triange ensues when, instead of getting lucky with his free-spirited classmate, he gets introduced to Beth, Linda’s punky 14-year-old daughter who develops a crush of her own on Aaron. Thisclever, provocative coming-of-age tale was shot downstate in Kalamazoo. In Person: Jeffrey Fine