Interview: Jacob Tierney and Emily Hampshire Talk About "The Trotsky" Showing at TCFF 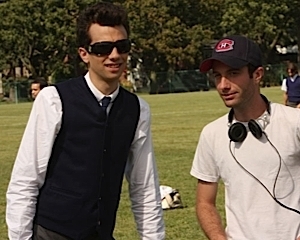 I saw "The Trotsky" on Wednesday night at the Traverse City Film Festival and got the chance to sit down in a green room to chat with writer/director Jacob Tierney and actress Emily Hampshire.

It’s hard to explain “The Trotsky.” Let’s start with this: It’s a film about a 17 year old boy in contemporary Montreal who believes he is the reincarnation of the 20th century Soviet Revolutionary, Leon Trotsky. It’s an odd premise, for sure. But it works. The film, which was shot in Montreal, directed and written by a Montreal native, and features a mostly Canadian cast, was extremely well-received at Wednesday night’s showing at The Traverse City Film Festival.

MyNorth: It’s obvious you two have a close relationship. How long have you known each other?

Jacob Tierney:  Almost fifteen years. We acted in a film together.

Emily Hampshire: I think we met at a wrap party in our late teens. We had friends in common.  And then we ended up being roommates in Toronto.

Jacob Tierney: (shouts)  NO!  None of us went to college, God knows!  We’re actors! (lots of laughter)

MyNorth: Did you always know you wanted to be involved in filmmaking?

Jacob Tierney: I started acting when I was five. I never had a “job” job.  I don’t recall making a choice.

Emily Hampshire: I started acting way later than Jacob. About 14.  Like Jacob, I don’t feel like I made a decision. I started doing plays in high school and acting professionally, and by the time you needed to make a choice –  like a career decision  – I realized all I had been focusing on is acting. I didn’t have anything else I could do!

MyNorth: What was the draw? What made you want to choose this kind of a life?

MyNorth: I’m trying to get a sense of how important is it to both of you that  “The Trotsky” is doing so well. It’s an amazing film and it’s getting great reviews.

Jacob Tierney: This film –for both of us – it’s really awesome. When you work as much as we have, you’re way more used to being in bad things than being in good things! Most movies aren’t good. You go with the best of intentions, and with talented people, but you don’t always end up with a super successful move. So when you’ve made a film like this that people respond to well…… it’s  the best feeling in the world.

Emily Hampshire: Also, at least for me, to not just be an actor for hire, I’m seeing something be made that is Jacob’s baby…..and it took so long to come to life.. (note: it took more than ten years to make.)  You just get more attached. And then when the response is great, it’s like: MY GOD! People LIKE your baby!

MyNorth: I love how you captured the way teenagers really talk and the way they really seem to feel: the sense of angst and alienation. How did you do that so well?

Jacob Tierney: That’s a lot of chemistry. You just put people together and you hope they click. Ricky Mabe, who plays Tony, is actually Jay Baruchel’s  (the actor who plays Leon’s)  oldest  friend. And when we were doing auditions, Kaniehtijo

Horn, who plays Carolyn, was one of the first people cast I didn’t know. I just fell in love with her. Immediately. I was like: her and Ricky. Yep. They loved each other. They’re perfect. It was exactly what I wanted. They kept looking at each other and finishing each other’s sentences.  It just kind of trickled down that way with everybody.  And we were fortunate to have the time to make this movie properly and let people bond. It’s something you can’t fake. Either you have people who like each other and want to be there working together or you don’t.  In this case, we’re really lucky. I cast a lot of friends. One of the actors, Jessica Pare, who play’s Emily’s best friend, is actually one of her dear friends.

Jacob Tierney: My father, who is the producer of the film, accuses me of having “dinner party mentality” when hiring. He says I won’t work with someone I won’t have dinner with. It’s true. I don’t. If I don’t want to have dinner with you, I don’t want to work with you. I don’t care how good you are, especially with a film like this. It’s a film that’s going to live or die based on it’s heart, ultimately. I felt pretty confident about my ideas, but I know that doesn’t mean anything if you don’t feel stuff. You have to put it all on the table. About the casting: there were people I sought out like Saul Rubinek, (who plays Leon’s father), Colm Feore, (who plays the fascist High School principal), Emily (who plays Leon’s love interest, Alexandra), and  Michael Murphy (who plays the leftist attorney who eventually represents Leon),   but then there were just like… KIDS! ….  like Jessica Comacho, who plays Skip, and Tommie-Amber Pirie, who plays Sarah. These kids – I just found them. They were spectacular, and they inject life in to every thing they do.  And that’s just good luck!

MyNorth: The characters were very real, very believable, despite the bizarre premise.  But the main character, Jay Baruchel, who plays Leon: amazing! Perfect.   The way he looks, the way his face and body seem to be from another period in time….

Jacob Tierney: You know, he’s actually in period clothes. Clothes from 1917. He really is. That’s one of the ideas the costume designer and I had from the beginning.  I was like: “ I want him in heavy wool. Dress him like we’re doing a

period film.” And then – thankfully – it looked like a school uniform.  It worked out quite well. It gave him a posture. That clothing: everyone is different, but for me, when I’m acting, it’s my shoes. I know it’s going to affect everything about how I move and act and walk and stand.  I thought by putting Jay in constricting clothes, it would work out well.

Emily Hampshire:  Jay will say that. He will say he found the character when he saw himself in those clothes.   .

Jacob Tierney: And when he put those small gold-rimmed glasses on!  At first, I wasn’t in to those glasses conceptually. I thought it was too much. Then I saw him with those on, and I was like “DONE! SOLD! “

MyNorth: Emily, when we first see you in the film you are a gorgeous PHD student who’s almost ten years older than the 17 year old Leon who is nerdy, in need of psychiatric help, and is basically stalking you. You even tell him he’s an insane obnoxious teenager, and you ask him to leave you alone. But to him, you are his Alexandra, the woman he is fated to love and marry. At first, it’s hard to believe you’ll ever be together. But by the time the two of you finally fall in bed, we totally believe the two of you could end up in love. How did you convince us?

Emily Hampshire:  It’s interesting, because that was one of the only questions I had for Jacob when I read the script. One of the things I struggled with most is for it to be believable that I would fall in love with this teenager. But honestly, those questions went away when I met Jay. He’s somebody I think everyone in this room – if he walked in  – you would fall in love with him. It also helped that he wasn’t actually a teenager! It really was Jay who made that easy. Jacob Tierney: What Jay brings to the table is that intangible thing: you want to watch him for the whole movie.   You believe he could get the girl. He’s pulling the weight of the story behind him. And interestingly, people would ask me when they read the script, “Will he really get that girl? That’s ’s impossible”!” And I’d say “Look, this actually DID happen to Leon Trotsky!  He really did marry a woman ten years older than him when he was 17!” I always knew in my head: this happened.  I knew there was a way to make this work because it really happened. Once I decided I was going to use his life, there’s no way I was going to leave out that love story.  It’s obviously one of the best things about it. And they really hated each other when they met.  I knew it was up to me and the three of us, and I think it’s a testament to Jay and Emily that it works.