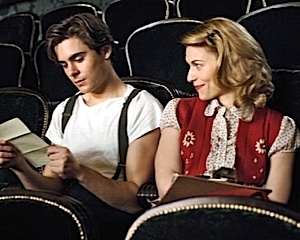 Temperamental genius, Boy Wonder, enfant terrible? No matter what you thought of him, at only 22 years old Orson Welles rocked the 1937 Broadway season with his revolutionary modern-dress and über-topical anti-Fascist production of Shakespeare’s Julius Caesar. With the help of his right hand man, British producer John Houseman, mercurial Welles brought excitement and high drama to the Great White Way – both on stage and off. My fifth pick of Traverse City Film Festival 2010 is Me and Orson Welles, the coming-of-age fictional story based on the 1937 production. In the film, a precocious New Jersey high school student, Richard Samuels, stumbles into a bit part in Welles’s play, then lands a major role in a love triangle—one he’s not equipped to handle.

The cast is exceptional, across the board: Claire Danes as ambitious assistant Sonja; Ben Chaplin as actor George Coulouris, who plays “Marc Antony;” Eddie Marsan as the stalwart John Houseman; and James Tupper, a dead ringer for actor Joseph Cotton. But the star of the show is Christian McKay, who channels Orson Welles with ease, vitality and sheer joy. McKay was nominated for seven awards for his star-turn performance and won two: Breakthrough Artist Award from the Austin Film Awards and Best Supporting Actor from the San Francisco Film Critic Circle. The real Orson would’ve given him a standing “o.”