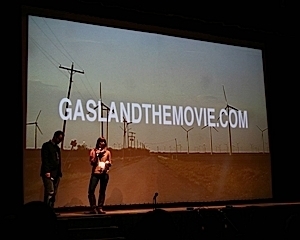 Fracking Fluid: the liquid used for drilling and extracting natural gas from wells, containing 596 ingredients that make up a hit list of health and safety chemical “don’ts.”

Gasland: the definitely Dangerous Doc from writer/director Josh Fox, and my fourth pick for a TCFF 2010 must-see film. Talk about a real life horror flick! Gasland is scary.

After being offered one hundred thousand dollars to lease natural gas rights at his home in the Delaware Basin in rural Pennsylvania, Fox checks out his options to see if this is something he wants to do. What he finds out takes him, and us, on a jaw-dropping journey across America—aka Gasland—as he discovers the “Red Zone” of gas wells spreading insidiously across the country, reeking environmental havoc state by state. From contaminated ground water, bubbling and fizzing, to toxic fumes and vapors, to tap water bursting into flames at the touch of a match—Fox shows the impact on the average Joe and Jill affected by natural gas production and left to fend for themselves.

In 2005 Vice President Dick Cheney pushed through the energy bill to “decrease the U.S.’s dependence on foreign oil.” A good thing perhaps, except for the corresponding increase in headaches, dizziness, loss of smell and taste, brain damage, bone marrow depression, embryo malformation, and testicular toxicity. Ouch.

Find the complete schedule for the Traverse City Film Festival, film descriptions, special film events and more on the MyNorth Film page.
See photos of the Opening Party and the first days of the festival.
X
X