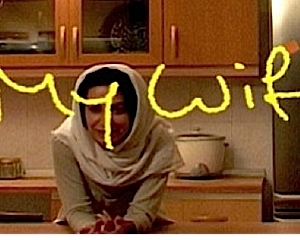 In the film Iranian Cookbook, Shirvani (President Mir Qanbar, TCFF ‘06) steps into the no man’s land of every Iranian household—the kitchen. Off-camera for the most part, Shirvani holds a dialogue with seven female members of his friends and family circle—“My Sister,” “My Wife,” “My Mother’s Friend”—as they prepare the various traditional foods of Ramadan, the Muslim holy month of fasting and feasting, all without the help of their men folk. The audience watches the preparation of delicious Persian dishes along with Shirvani, who admits, “The kitchen is the place where my mother spent over 30 years and I never really noticed its details.” Well, he’s noticing now, as we learn with him exactly how much time and energy go into cooking and serving those mouth-watering meals—and how it’s the women doing all the heavy lifting for their family’s annual religious-based feasts. Not surprisingly, Shirvani’s mother-in-law and wife seem to disagree over the time commitment necessary for proper tradition. (For the record, Shirvani’s wife is now his ex-wife.)