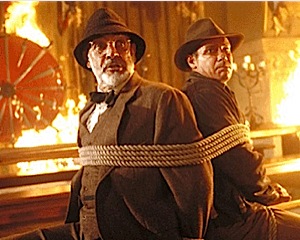 The 2010 Traverse City Film Festival kicks off on July 27, 2010 and Michael Moore is once again showing free movies every night in the Traverse City Open Space. If you haven’t been to one, you’re missing out on moonlight on the bay, happy people on blankets and lawn chairs and classic movies on the big inflatable screen. It’s the drive-in experience—only on the bay, without the cars.

Below is the line-up for the 2010 Traverse City Film Festival free movies in the Open Space. CLICK HERE FOR THE COMPLETE LINE-UP OF THE 2010 TRAVERSE CITY FILM FESTIVAL

Our favorite fedora-wearing, whiptoting, snake fearing archaeologist adventurer returns to Open Space, this time in search of the Holy Grail. Steven Spielberg and George Lucas team up for the third installment of the famed Indiana Jones series that sees Indy (Harrison Ford) reunite with his estranged father (Sean Connery, cue swooning) in a race against the Nazis. Traveling from Venice to the heart of Nazi Germany and on to the Canyon of the Crescent Moon, Indy and his father are never far from trouble.
Showtime: Saturday, July 31, 2010 at Dusk

Joel and Ethan Coen’s second feature film is a rollicking masterpiece. Perpetual criminal Hi falls in love with the cop taking his mug shot, Ed, and they are married soon after. Upon discovering that Ed is infertile and adoption is an impossibility because of Hi’s criminal record, the couple kidnaps one of the quintuplets of local furniture mogul Nathan Arizona, figuring five kids is too many for one family anyway. Their happy new childrearin’ life is all they had hoped it would be, until a pair of Hi’s old cellmates shows up unannounced after breaking out of jail in this fast-paced cult classic.

Come on down to Open Space for a movie that is “Practically Perfect” in every way and sing along to your favorite tunes as Disney’s beloved magical nanny inspires happiness wherever she flies. In Mary’s charge, the Banks children learn the meaning of “Supercalifragilisticexpialidocious,” discover the medicinal effects of “A Spoonful of Sugar,” and “Step in Time” with a band of lively chimney sweeps. A chance to re-watch this Walt Disney masterpiece on the big screen is not to be missed, so bring the entire family for an unforgettable evening and enjoy your “Jolly Holiday” at the Open Space!

“Help!” is on the way. The Beatles’ second film is a madcap romp through the Austrian Alps with Fiendish Thingys and everybody’s favorite mop topped foursome. Inspired by the Marx Brothers’ “Duck Soup” and taking off James Bond films, the premise involves a mysterious cult that discovers their sacrificial ring is stuck on the finger of the one and only Ringo Starr! Will Ringo get away or will he be forced to be the next sacrifice to the goddess Kaili? Sing along with 11 Beatles greats including “Ticket to Ride” and “You’re Going to Lose That Girl” and celebrate the zany greatness that is The Beatles.

In June, we had earthquake in Traverse City and in July, conditions are looking right for a “Twister!” Pack your foul weather gear for the next natural disaster to hit town — on the big screen. Steven Spielberg produced this extreme action blockbuster, which follows a rag-tag team of storm chasers who risk their lives in pursuit of science. Armed with breakthrough technology aimed at tracking tornado movement, our daring crew dodges flying cattle and fights off rival storm chasers led by the nefarious Dr. Jonas Miller on their action-packed mission. With a tornado at their heels and a stormy romance afoot, will our team make it out alive?

You don’t need to speak Whale to understand the humor and heart in this Pixar classic. After the young and plucky clownfish Nemo is caught by a Sydney dentist, it’s up to his overprotective father Marlin to track him down. Accompanied by the forgetful yet relentlessly chipper Dory, their quest takes them across the vast ocean, where they encounter everything from vegetarian sharks and a swarm of beautifully enticing jellyfish to surfer-dude turtles. Experience this underwater adventure on the waterfront at the Open Space. The festival thanks Disney for this great community treat!