Tips on Boater Safety from a Coast Guard Responder 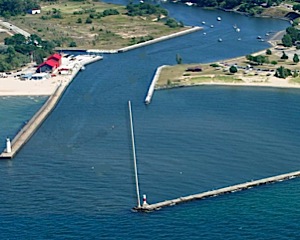 After 25 years of writing the boat smart column coupled with my many years as a Coast Guard rescue responder, I’m absolutely convinced that, in time, most  boaters will die on the water. That is, unless they stay forever vigilant.

Believe me it’s a thin line between a boating mishap and eternity—very thin. Yet, thin as it might be, boaters can remain forever safe if they remain forever on guard.

Boaters must be mindful that when they let down their guard, that is when they should be foremost on guard. Yet as obvious as this might seem, it seemingly is ignored, or worse yet, nonexistent in many boaters minds. Letting down one’s guard can prove deadly, as in the case of a tragic boating accident that recently claimed a life along the eastern shore of Lake Michigan.

This accident involved a friend for whom I hold the highest regard as a safety conscious captain. In fact, my first column of the 2009 boating season addressed his detailed approach to keeping safe on the water. What’s more, he is a long-time licensed Coast Guard captain.  I find incomprehensible that a year later would have me now writing about his 29-foot charter boat colliding with Manistee’s South Breakwater, near the navigation light that sits at the end of the 1,900-foot-long structure.

The collision occurred on May 22, at approximately 5 a.m., while the charter boat was outbound Manistee Harbor in thick fog. The boat struck the seawall and riprap rocks at the base of the light and then carried about 40 yards out into Lake Michigan where it sank in 38-feet of water. All seven people aboard managed to don life jackets before the boat quickly sank in 44-degree water.

Ironically, a year earlier during my interview with the captain, he stressed how he instructs his crew on the location and proper use of life jackets. That they donned the life jackets moments before the boat sank may have saved their lives. Unfortunately, his first mate died from severe trauma to his neck, back and heart.  A nearby boater heard their cries and plunked them from the frigid water.

During my 25 years of writing the column, I have never been so reluctant to report a story. I can only imagine the pain my friend must bear for letting down his guard, if but for a moment. Yet the truth be told: as captain it was his duty to stay forever vigilant, especially in thick fog. It makes little difference the experience level of those aboard for the safety of the vessel  remains, as it has and always will, in the hands of the captain. The Coast Guard’s investigation remains tightly under wraps. Nevertheless, one must ask, if radar was aboard, was it malfunctioning.

Whatever consolation it might be to my friend for whom I deeply care, the most infamous sea disaster in the annals of maritime history involved a classic case of a veteran sea captain letting down his guard; on April 15, 1912, the SS Titanic sank after hitting an iceberg in the north Atlantic with 1,522 lives lost.  The Titanic was repeatedly warned by nearby ships of icebergs in the area, yet the captain elected to operate at an unsafe speed ignoring the dangers at hand.

Ironically before departing Southampton, England, on April 10, 1912, on the Titanic’s maiden voyage a reporter asked Captain A.J. Smith if he had ever encountered a mishap at sea. His response:  “I have never been in any accident of any sort worth speaking about…I never saw a wreck and never have been wrecked, nor was I ever in a predicament that threatened to end in disaster of any sort.”

This boating season marks the 25th year Tom Rau has been writing his boating safety column. Much of his 27 years with the Coast Guard involved search and rescue. From this wealth of experience he authored the book Boat Smart Chronicles. The book is a first-hand account of over 20 years of boating mishaps with valuable lessons learned. For more on Tom and his life-saving efforts visit:  www.boatsmart.net.

More Ways to Get on the Water!