The Debut of Bliss Gardens Farm and Community Kitchen, Near Petoskey 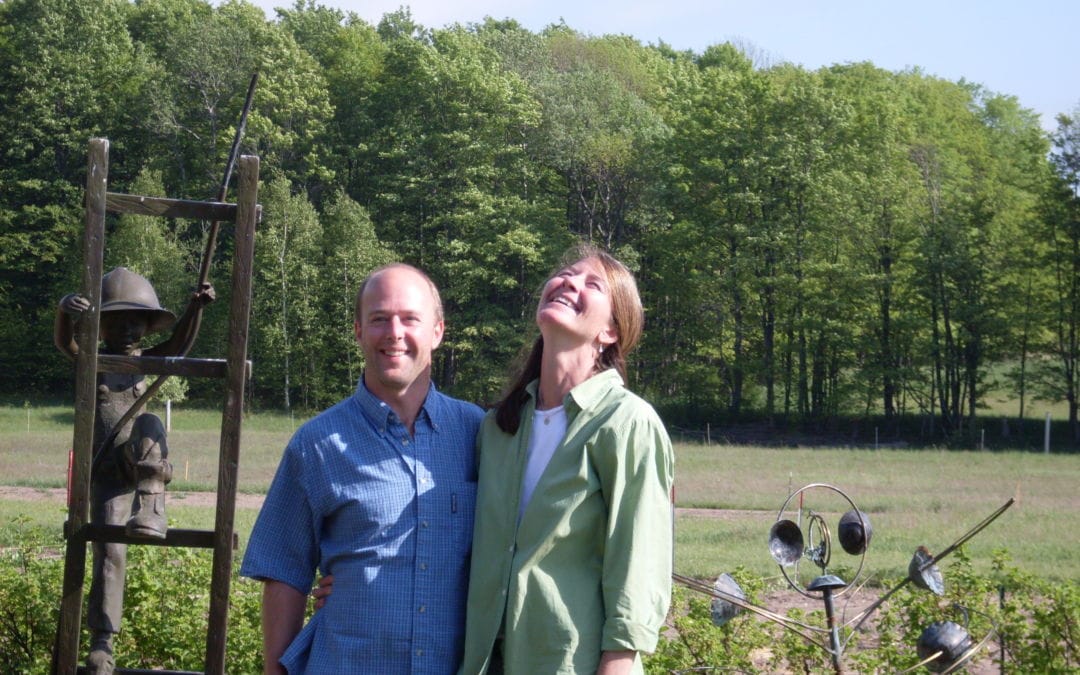 A sustainable farm which could bring local organic food to many people who never had access to it before, including kids in public schools, the poor, elderly, disabled and jail inmates.  A community kitchen anyone could use to jar and can and bake in order to sell their creations in farmers markets and stores. These were just some of the ideas that are coming to fruition at Mary and Craig Rapin’s farm near Cross Village.

Farming might seem a long way from pharmacy school at Ferris State, where they met. But the Rapins say the evolution all makes sense, given their desire to help people find healthier ways to live. After they got married, they moved to Northern Michigan, had two children, and eventually became co-owners of Prescription Services Pharmacy at Northern Michigan Hospital. During their decade-long tenure, they tried to change the way their pharmacy worked.

“We’ re kind of like … anti-drug pharmacists!” says Mary Rapin. “We tried to come up with the idea of whole care for our patients. We talked about lifestyle modification and we did a lot of one-on-one with our patients in addition to just counseling at the counter.  We put a compounding lab in so we could compound medications for hospice and cancer patients, and bio-identical hormones for women.”  In fact, their pharmacy won an Innovative Pharmacist award from the state.

Mary says as she and Craig continued looking at alternatives to medication, they saw first-hand the effects of lifestyle on people’s health. “ADHD. Diabetes. Kids on medications, women in menopause. We realized the impact of a healthy diet and exercise.

Though the Rapins have a home in Petoskey where they raised their two children, they started looking at land north of Harbor Springs. They planned. They saved their money.  They kept dreaming. And then one day, several years ago, they saw a farm for sale by the owner in Cross Village.

“As soon as we walked on to the land, we were like  – OK!  It was just this feeling.  We just knew it was right. It had a half-finished barn all boarded up. It was spring, and everything was showing. So we bought it.”

Mary says, “It just kind of fit. This farm was set up bio-dynamically. The owner had worked to get the soil in really good shape. He had planted trees for windbreaks. It had a well. It was half woods and half fields on 25 acres—a nice mix.“  (They picked up 20 more acres a year after they bought it.)

“We knew we could grow food there. We knew we were saving it from being developed into a neighborhood. We knew that it was what we should do.”

The Rapins kept their jobs at the pharmacy as they started to work the soil, which had been fallow for several years. “We started getting manure from local farmers,”  says Mary.  “And that’s when we started learning about poverty in the area. There are two different cultures here: wealthy people who have second or third homes, and then there are local people who are struggling. And that’s where the idea for the commercial community kitchen came in. We realized that if people could have a market for what they grow—they all have ideas, but limited resources—they could process their food through our kitchen, and then it would be legal to sell it in stores or in farmers markets.” Mary says she and her husband envisioned local farmers, cooks and caterers making salsas, jams, packaged foods and baked goods in this kitchen as well a preparing foods for large groups and events.

“We wanted to make it so anybody could come in and use it," Mary says. We decided if we wanted to change society, then we were going to have to bring people in the kitchen and have them love the food and get kids in there to enjoy the process of cooking and growing. That’s how I thought we could really make significant change.”

Mary says she went on the Internet and found out about the concept called an “incubator kitchen.”  She says, “It’s where people incubate ideas, grow ideas. We haven’t figured out yet how we’re going to rent our kitchen, but it could be a barter system so no one will be excluded. Maybe people could help us fix a fence or leave some food for us. It’s about building community and family around food and cooking and nutrition. If we can make the family healthier, we can make the community healthier.”

The first year they had the farm, they planted a variety of crops: greens of all kinds, green beans, purple beans, flat beans, herbs, tomatoes, corn and squash.  The farm’s first customers were the Rapin’s clients at the pharmacy and Northern Michigan Hospital. Mary says, “ Everybody loved it and bought it. I’d sell it to my neighbors, too. And now we sell at the Grain Train, Julienne Tomatoes, the Cross Village General Store, and other spots. And we’re really striving toward becoming a bio-dynamic farm.”

Throughout their time at their new farm in Cross Village, Mary says she and Craig have stayed true to the original concept: making local freshly grown nutritious organic food accessible to everyone.

When the Rapins bought the farm three years ago, they immediately started improving the barn—complete with an upstairs dance floor—and other structures on the site, as well as planting and improving the soil. Two years ago, they started designing and building the community kitchen. The kitchen was finally finished this spring. They’re now researching ways to put a windmill on the farm.

This past May, the Rapins held a Springfest at the Bliss Garden Farm and Community Kitchen to celebrate how far the farm, the land and the kitchen had come.  Hundreds of people came to view the rows of vegetables, inspect the newly fixed-up barn, get a tour of the huge shiny community kitchen, partake of the potluck of local foods and then listen to music and participate in the square dance.

Community leaders are now getting involved in the ideas the Rapins have brought to the Cross Village/Good Hart/ Bliss area as more farms and crops spring up near the Rapin’s property.  Some residents are talking about making the Bliss Community Farm and Kitchen part of an agricultural destination which would feature farms throughout the area.

As far as the community kitchen goes, three products and several baked goods will be featured by the farm this year. Mary and her daughter will be on the farmers market circuit this summer. Look for Bliss Gardens Farm and Community Kitchen vegetables and other products, as well as their cookies, bars and other items called “Baked Bliss.”

But the Rapins hope many more items will be created in the kitchen and sold at local stores and farmers markets in the very near future.

How it is that Mary and her husband somehow feel compelled to change the world?

“Well, we’re determined to change this one little part of it anyway," Mary said. "We really tried, when we owned the pharmacy, to have a positive impact on the community, and really help people. And now we’re going to do it with food and farming. I would say our goal is to build family and community around good nutritious food and cooking.”

There’s a special glow about Mary, Craig and their two children these days. You can see it as they gaze out across the fields they’ve tilled and the barn they fixed and the huge community kitchen they created. It’s a glow that emanates from a family that is determined to follow their dreams, and knows they can make a difference.

Watch Martha Ryan, of Martha’s Leelanau Table Prepare Leelanau Raclette Fondue with over 90% local foods from Northern Michigan. And then get the recipe.

Want to get Northern Michigan food and wine ideas in your Inbox? Subscribe to the MyNorth Food and Wine Newsletter!