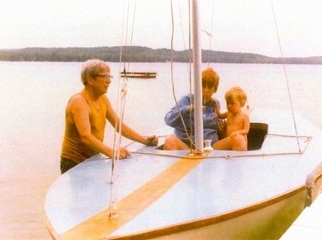 This is the story of a home-built National One-Design wood sailboat, how it passed from one generation to the next, from one family to another, and how it was built, rebuilt and restored with loving care over more than 40 years.

It began in a garage in Ann Arbor, Michigan, in the mid-60’s, and was a dream come true for my husband, Lloyd T. Williams, Jr., a lawyer with the Ford Motor Company.

In spite of the many practical reasons to not undertake such a major project, and politely brushing aside my wifely caveats, Lloyd took a deep breath and sent for a kit he had seen advertised in a boating magazine. It arrived in due time, but as he examined the written material, he became alarmed. Our daughter Christina reminisced later, “It wasn’t much of a kit. The ribs came put together, but the keel was an unshaped plank, and the bow stem was just a hunk of wood. The plans left a good deal to be desired. They said things like ‘Install the keel’ and ‘Make sure to brace the mast well.’”

And so, frustrated but undaunted, my lawyer-husband began to build a NOD sailboat, essentially without benefit of counsel. Our three-car garage was his workshop. Since the garage was unheated, his time was limited to weekends in the spring and fall and the weeks we were not vacationing at our cottage on Lake Leelanau.

He was also fully engaged as a trustee of the Ann Arbor School Board, at that time immersed in the complexities of integration and busing. He had a willing but not always available helper in Christina, then in high school, who from early childhood had expressed a definite preference for wood over dolls.

The boat took six years to complete. We bought a trailer and drove it to Lake Leelanau at the beginning of our vacation in 1968. We launched it at a ramp near our cottage and celebrated the occasion with champagne, chicken sandwiches and oatmeal cookies.

Several adjustments were required before the boat was seaworthy, as when the first rudder proved too heavy, and the bolt that held it to the tiller broke. Chris happened to be out in the middle of the lake, sailing solo in a stiff wind, when she found herself suddenly careening in circles and realized she had no steering. She let go of everything, took down the sails and waited hopefully until an observant neighbor came along and towed her home.

When the wrinkles had been ironed out, my husband sailed the boat for several years, sometimes by himself (I was no sailor), often with friends. In time, however, and as the children came less frequently to the cottage, the NOD often just sat in the boathouse. And we began to ponder the possibility of selling it, increasingly aware that my husband’s joy had been in the building of the boat; sailing it was the icing on the cake.

So eventually we approached two neighbors, John Bogley and his cousin John Waite. The boys were lively teenagers, enamored of sailing and its innate challenges. To our delight, they accepted our proposal, their parents approved, arrangements were promptly made and the new owners took the sailboat out of our boathouse and put it back where it belonged—on the lake.

A year or two before we purchased the boat, the Williamses had kindly allowed me to sail it in the National One Design World Championship Regatta on Lake Leelanau. Two days of heavy weather (with us mostly chasing the fleet around the course), followed by a beautiful light wind on a Sunday morning (demonstrating that Lloyd’s design was fast) revealed just how much I had to learn about sailing this boat, as well as what adjustments needed to be made before it would be ready to compete, a goal my cousin and I were both set on achieving.

I believe that at the awards ceremony I was handed a trophy for being “Most Persistent Under Adverse Conditions.” It didn’t matter if the award was really for the boat putting up with my sailing mistakes, or a recognition that we lacked the necessary rigging for racing (from basics like hiking straps and a trapeze to keep the boat flat, or the fact that our halyards were hemp line that stretched significantly when wet), I was hooked on National One-Design sailing.

I spent the next summer as crew for Bill Steel on his National, Tigger Lilli. I learned how the boat worked and tried hard to be worthy of Bill’s talent; he’d already won the World Championships twice. Bill became my mentor and friend that summer.But the Lloyd Williams–built National beckoned, and I wanted the chance to add to the National fleet on the lake. I think it gave the Williamses some comfort to know that the family’s creation would be moored next door. Of course, they were putting a lot of trust in a couple of teenagers with more ambition than talent.

After we had bought the boat, and on our arrival at the lake the next summer, we had a new set of sails, purchased by John Waite’s dad, and a log list of rigging adjustments to make. The first order of business was to figure out how we could rig the mast with the necessary hardware for a trapeze. As we untangled the stays, shrouds and halyards, magically the two pieces of stainless wire pop-riveted into the mast were already in place. To this day neither John nor I know who made this vital installation, but whoever it was, I picture him or her smiling happily at seeing John and me able to accelerate the launch of our new summer adventure.

Lloyd’s boat became a never-ending project. John and I sanded and painted it, adjusted leads, created a new rubrail, installed stainless halyards, and built and installed new floorboards. What started as an adventure and emerged as a hobby finally became a passion.

As barebones as the instructions in the kit at that Lloyd used to build the boat had been, John and I had only our own analysis of the rigging—the go-fast components—we saw on other boats to guide our work.

We spent hours on the water, with varying but generally increasing degrees of success, and met great people from all across the Midwest as we raced. Each day we sailed on Lake Leelanau, we would sail past the Williams cottage as we returned home. Occasionally we would sail a little closer than necessary, in hopes that Lloyd and his family would enjoy seeing the boat in her element.

The joys of relatively unencumbered summers with plenty of time for sailing eventually gave way to the demands of adult life. The summer that John could not come to Leland and sail was a sad watershed. The World Championships were held on Tawas Bay that year. My brother Bill, who was 24, served as crew. I was 21. Lots of wind, big waves and the usual array of talented competitors made this trip quite an adventure. Bill and I ended that weekend winning first place among the juniors, though we felt a little guilty since we were definitely on the high end of the junior category. To this day we laugh at ourselves pretending that there were 12-year-old sailors crying in the background as we stepped forward to accept our prize. (There weren’t, trust me.)

After graduating college, my trips to the lake became shorter, but not less precious. My parents, bless them, always had the National, which we had christened the Sloop John B., out on the hoist, or ready to launch when I got there. In the late 1980’s, my girlfriend, Shauna, joined me for my brief stays at the lake. She was as enchanted by the lake and the Sloop John B. as I was, confirming that she was the one for me. (Now we bring our three kids across the country to the lake each summer.) Shauna and I sailed in the World Championship regatta on Lake Leelanau one summer before we were married. I’ll never forget the feeling of rounding the first windward mark in the first race of the championship in a light wind—in first place. That day, the mark was just a couple hundred yards from the Williams cottage. Unable to cope with the pressure, I guess, we finished the weekend a respectable distance from first place, but with a lifetime of memories.

As our family grew, time on the Sloop John B. became scarce, and it became a strain on my parents’ storage capacity at the lake. When my mom suggested we donate it to the Maritime Heritage Alliance, a group of people devoted to restoring old boats, I happily agreed. We checked with the Williamses, of course.

Working through the better part of a winter, Bob Core, Howard Byrne and Bob Dost and company did a marvelous restoration job. Its completion coincided with the Williamses’ arrival at Lake Leelanau in the summer of 2008, and it was an exciting day to have Nancy (Lloyd had died in 1999) and Christina and her husband David down on the dock to inspect the boat the Alliance had graciously allowed us to take to the lake and enjoy during our vacation. We were proud to hang it off the buoy in front of my parents’ house and enjoyed the familiar sound of the shrouds slapping on the aluminum mast at all times of the day and night.

It had been a few years since I’d been in the boat, but stepping into it for a sail was as comfortable as seeing your best friend as you walk down the street. The boat sailed beautifully, as always, and there was a combined celebration of Lloyd’s boat by his family and ours on the east shore of Lake Leelanau.

As my brother Bill and I finished bailing out the last of the latest rain storm before returning the Sloop John B. to its home at the Maritime Heritage Alliance, we lingered, leaning on the deck, discussing decades-old ideas about ideal jib lead positions and the best locations for proper mechanical advantage and go-fast technique in varying wind conditions. My dad, always an active supporter of my passion for sailing, and I reluctantly connected the trailer to the car and made the drive back to the Maritime Heritage boat shop on West Bay.

The Alliance is dedicated to preserving the sailing heritage of the Great Lakes. In its new home, the Sloop John B. is successfully preserved—and the joys of building and sailing the boat Lloyd Williams made live on in the happy memories of the Williams, Waite and Bogley families.

Shortly before we all took off for our respective homes in the late summer of 2008, the Bogley and Williams families met on the banks of Lake Leelanau to say au revoir. As we looked down on the Sloop John B. gently rocking in the shallow water, several of us commented on the remarkable history of this unique boat, and before long we were discussing how we could write a story about it. Everyone in the gathering expressed interest, and the enthusiasm of the retired publisher and soon-to-be retired editor in our midst gave substance to what was initially simply a notion. Before we parted, a format had been agreed upon, and the writers selected.I know the creator of the National One-Design would be ever so quietly pleased at its longevity and the challenges and pleasure it continues to provide. Putting the saga into words has been more than icing on the cake for me, and I hope for John. We hope it has told accurately the story of an ordinary man’s dream and its extraordinary consequences.