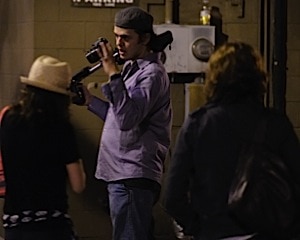 Traverse City filmmaker Jeffrey T. Morgan spent May Day weekend in Traverse City shooting his short film, Killer of Killers, entirely on over-the-counter Canon DSLR (digital single-lens reflex) stills cameras with built-in high definition video capability.  DSLR cameras are all the rage amongst creative professionals and serious hobbyists who work with video, because at $2,000 to $3,000 per unit they are available at a fraction of the cost of professional grade cameras.  To demonstrate the prowess of DSLR cameras director Greg Yaitanes shot the season finale of the TV show House M.D. on a Canon 5D Mark II, one of the cameras Morgan used on Killer of Killers.

The short film Killer of Killers is a vigilante story with a twist about a dark figure who is chasing a homeless man through the city. Scenes include indoor and outdoor locations, and Morgan chose to use very little artificially placed light throughout filming. The film was shot using two cameras, Canon EOS Rebel T2i and Canon 5D Mark II.  Morgan says, “One of the benefits of using these cameras is their light sensitivity.  They perform very well in low light. We shot all night, primarily using streetlights, with a little LED fill light.  My next project using these cameras will be in July, shot mostly indoors, at night, primarily lit by firelight.”

DSLR cameras contain larger sensors compared to most compact digital cameras, allowing for a shallower depth of field and a warm look which very closely simulates 35mm cinematography. The cameras use still photography lenses.  “The cheap $100 lens that comes with the camera makes great images,” says Morgan, but he and other video professionals prefer to invest in professional 35mm still lenses.  “This is still more economical than a professional grade HD video camera because a professional still lens may cost $500 to $1800, but a professional cinema lens can cost $8,000 to $30,000,” says Morgan. Another cost saving benefit of DSLRs is that the footage is stored on inexpensive memory cards.

When asked about the challenges he faced shooting on the Canons Morgan said, “You really have to get your exposure right the first time.  There isn’t much latitude for correcting it in post because of the compressed compact format of the video files.  Orange/Blue color correction is not so much of a problem.”  Other challenges include panning.  Quick movement of the camera creates a misshapen pixilated image called “rolling shutter artifacts.” Use of a stabilizing device like a tripod or shoulder mount is key to making clean video with these cameras.  One would also not count on the internal microphone to deliver clear sound as manipulation of the camera is recorded as well as the subject.  For professional video projects one would need to use a supplemental sound recorder.

For home video enthusiasts, these cameras would not be a great option for capturing the high school basketball game, because they do not auto focus well and work much better when they are stationary. But adding a wide-angle lens does enable them to capture a larger scene and create beautiful film of the children playing in the backyard or living room.  A DSLR might be a good investment for serious hobbyists who take both still and video shots of wildlife, for example.  One gets a high-end HD video camera and stills camera for the price of the stills camera alone.  Dan Irving, Killer of Killers‘ set stills photographer, who shot production stills on his DSLR sums it up by saying, DSLR cameras “offer a degree of creative control in a package that is more compact and less costly.  But for now there are limitations.”

Jeffrey T. Morgan is a commercial and motion picture producer and director.  His Prometheus Motion Pictures  is located in Traverse City. Cinematographers on Killer of Killers were Morgan and Todd Zawistowski.  The on-set stills photographer was Dan Irving.  The gaffer (lighting technician) was Matt Lamphere.