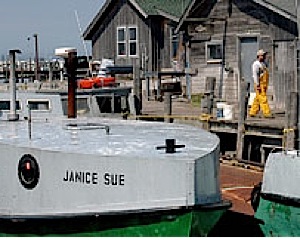 In a major step toward completion of its strategic plan, the Fishtown Preservation Society (FPS) has completed the rehabilitation of the Steffens & Stallman Shanty, a historic structure in Fishtown, the commercial fishing village in Leland.  The rehabilitation, completed over the last two months by the Easling Construction Company, was guided by historical architect Richard A. Neumann, of Petoskey.  The project consisted of the exterior and interior rehabilitation of the shanty, including structural elements, new roofing, replacement of the siding, wood door and window restoration, painting and electrical.  The goal of the project was to retain and preserve as much of the original and/or existing material of the building as possible, replacing many elements of the building with new materials to replicate the historic conditions as closely as possible.  Replacement of the severely deteriorated siding and roofing will be the most visible elements to those who come to see the results of the project.

Read more about the history and preservation of Fishtown

The Steffens & Stallman Shanty was constructed ca. 1906, as a working fish shanty.  It supported fishing operations out of Fishtown, which has been home to commercial fishing for more than a century.  It is one of the oldest and most historically intact buildings in Fishtown.

Fishtown is a working waterfront with a cultural fishing heritage that draws thousands of visitors each year to the Leelanau Peninsula and Leland.  A special place that portrays commercial fishing and maritime heritage, Fishtown is home to a broad and rich history and is an important economic asset to the region.  FPS acquired ownership of the site to preserve its historical integrity and ensure that it continues as a publicly accessible and authentic connection to regional history, Great Lakes fishing and maritime traditions.