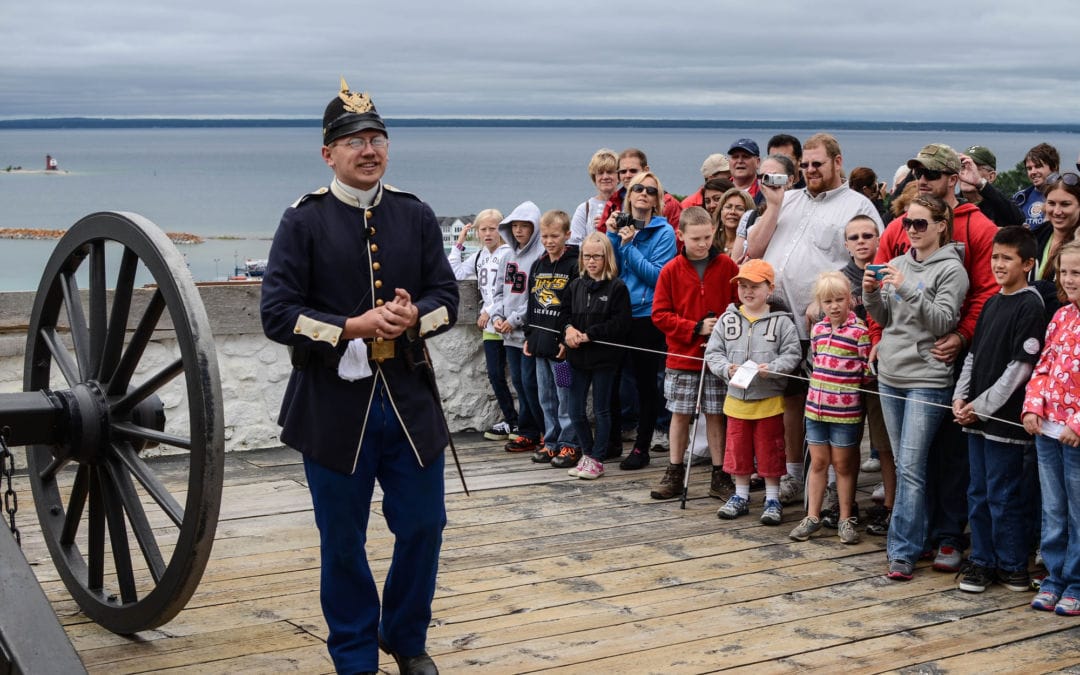 Kids will have a great time on Mackinac Island or at Fort Michilimackinac even if they don’t know these fun—and sometimes gory—facts. But why not share some of the history, including links to terrific articles you can read together, so all of you get the very most out of a visit to the Mackinac Straits region?

Move Over Lewis and Clark: John Carver Tried to Find the  Northwest Passage Before You Did—From Mackinac

People once believed that you could paddle a canoe from Fort Michilimackinac all the way to the Pacific Ocean! In 1766 a party set out to do just that. But, um, they never made it … Guess why? Read Explorers Set Out to Find the Northwest Passage From the Straits of Mackinac to learn this story of adventure, disaster, deception and treason.

Your Thumbs Could Go Kaboom?!

You might be chosen to help fire the cannon at Fort Mackinac. If you do, make sure to put on your thumb guard—imagine a sock for your thumb. The cannons fire blanks today (so your thumb won’t be in danger) but if the cannon were firing a ball and you weren’t wearing your thumb guard, that kaboom! might send more soaring in the air than just the cannon ball!!

A Lovely Day of Lacrosse Turns Deadly for the British

Can you think of a better plan for taking over Fort Michilimackinac than the way Ojibwe and Sauk Native Americans did in 1763?  The Native Americans began a game of baggatiway (like lacrosse) outside the fort walls, then threw the ball over the walls—pretending that it happened accidentally. When the British soldiers opened the gate to let them retrieve the ball, the Native American women who’d been watching the game pulled weapons out from under their blankets and handed them to the warriors. Read the blow-by-blow (sometimes gory) details in Deadly Lacrosse Game at Fort Michilimackinac in 1763.

Also, British trader Henry Alexander hid in the Langlade house at For Michilimackinac during the Native American attack of the fort in 1763. Once you’ve seen the house, imagine hiding there. Could you have thought of a better hiding place?

So you think YOU have a stomach ache?

Before Dr. Beaumont, the Fort Mackinac doctor, looked inside the stomach of a man wounded by a gunshot at the fort in 1822, many people believed your stomach mechanically ground up the food you ate (big teeth in there?!). The wounded soldier’s hole in his stomach would not heal. It stayed a gaping hole. While this was horrible for the patient, Dr. Beaumont saw it as an opportunity to learn about how the stomach works. He dropped a piece of meat tied into a string through the hole in the wounded man’s stomach, and with that, Dr. Beaumont proved that food is digested through gastric juices. Read the whole story with colorful details in The Gruesome Medical Breakthrough of Dr. William Beaumont on Mackinac Island

Some people think so. Rumor has it that toys put away in the Officer’s Stone Quarters at night were strewn everywhere in the morning and that strange apparitions that look like young soldiers haunt the guard house. Ghost hunters have even traveled there to check it out.

What’s hidden beneath the Fort?

For a trip back in time, a fitting way to start is on a ride with Mackinac Island Carriage Tours, which dates to 1820, the year Magdelaine La Framboise built her home. Tours are $23.50 for adults; $9 children. No trip back into the time of La Framboise would be complete without a visit to St. Anne’s. The church was rebuilt in 1880 but still resembles the building of La Framboise’s era.

The British Army wants YOU!

Are you 5 feet tall? If you are you’d be tall enough to join the British Army in the late 1700’s (guess it didn’t mater how old you were!).

Looking for things to do with kids in Northern Michigan?

Check out the MyNorth Kids section!

Get Kids Up North ideas in your email box every month!

Now you can receive a monthly email filled with great ideas for Kids Up North in your e-mail inbox. Just contact Jodi at jsimpson@traversemagazine.com and ask her to sign you up for the Kids Up North newsletter. And then let the fun begin!