Deadly Lacrosse Game in Mackinac Straits at Fort Michilimackinac in 1763 This Traverse Classic is featured in the May 2005 issue of Traverse, Northern Michigan’s Magazine. Photos taken in 2016 by Kelly Rewa.

Under an unusually hot sun on a late spring day on the Straits of Mackinac, British Major George Etherington, commandant of Fort Michilimackinac, was suffering from an acute case of cultural blindness. And there was no excuse for it. Relaxed at the sidelines of a rousing game of baggatiway (similar to lacrosse) outside the fort, the major should have seen the danger signs in this Ojibwe versus Sauk contest of sweaty, half-naked bodies painted with white clay and charcoal.

The 30-year-old officer was born in the colonies, and most likely grew up on stories of Indian uprisings. He’d even served in the just-ending French and Indian War, in which the English had wrested control of North America from the French—a victory that had put this previously French fort in Etherington’s care. Though the major had been raised on American soil and had fought on it, he was still English. And in that country, a battle was a battle, and a sporting event was a sporting event.

Perhaps that explains why the major missed the clues. Though well armed, his garrison of 35 or so soldiers was vastly outnumbered by the hundreds of Indians encamped around it, there to exchange furs for wares—steel tomahawks and knives included—from French Canadian traders. That there’d been a run on tomahawks of late didn’t seem to worry the major. And he was only irritated by warnings from the many French Canadians who lived at the fort that the Indians were planning an uprising. He threatened to have the next person who spread similar gossip locked up down at Fort Detroit. The unwitting Etherington had not yet heard that Fort Detroit was under siege, attacked several weeks before by a coalition of tribes led by Pontiac, the Odawa chief. Foreseeing that English domination spelled the end of his people’s lifestyle, Pontiac had just begun his famous rebellion.

Etherington even refused to listen to the warnings of the esteemed fur trader Charles Langlade—a man of French-Indian blood who had fought alongside the Indians since he was a young boy and was widely revered by them. It must have taxed Langlade’s charity to warn the major, as England’s control of North America meant the French monopoly over the fur trade was over. But Langlade had seen what terrors his Native American cousins could unleash on their enemies. Evidently, protecting his business interests was not worth shedding that much blood. For his magnanimity, Langlade suffered a scolding from Etherington. Oblivious to all the foreshadowing, when the Ojibwe invited him and his soldiers to watch their match outside the fort, a game they said was in celebration of the King’s birthday, Etherington accepted—probably donning his white wig. After all, it was a formal event. He then gathered most of the garrison to watch with him. According to the major’s accounts written later, they left the gates open and their weapons back in the fort. Etherington cheered for the Ojibwe along with the two chiefs of that tribe, Minweweh and Madjeckewiss.  After all, the major had bet that the Ojibwe would win.

With some 500 players, the game must have looked more like a battle. In the furor Etherington didn’t miss Charles Langlade. He was inside his home in the fort with his family. And Etherington barely noticed the Indian women lingering at the fort gates, wrapped tightly in bulky blankets as if the day was cold and the calendar did not read June 2, 1763.

It happened in seconds. A frenzy of sweaty, painted bodies clamoring for the leather-wrapped chunk of wood that was the ball as it fell at the mouth of the open gate. The women opening their blankets and handing off knives and tomahawks to the athletes-turned-warriors. Shrieks, screams and blood. Etherington and his lieutenant, William Leslye, whisked off to the woods—as the other fort officer and likely the only soldier armed that day, Lieutenant Jamet, was killed. The plan so carefully laid by Minweweh and Madjeckewiss, cohorts of Pontiac, was executed flawlessly.

The attack and the events that followed were recorded in the painfully descriptive memoirs of Alexander Henry, who—at the time of the attack—was a young English fur trader staying at the fort. “Going instantly to my window I saw a crowd of Indians within the fort furiously cutting down every Englishman they found,” Henry wrote.

Henry, observing that the Indians were killing only English and sparing the French Canadians, ran next door to Langlade’s home for help. When Henry pleaded for help, the trader answered in French: “What do you want me to do about it?” Fortunately for Henry, Langlade’s Panis Indian slave girl hid him in the attic. Henry watched the scene unfold on the fort grounds below him from a hole in the attic wall.

The next day, the Indians rooted Henry from his hiding place. For the young Englishman, the following days played out in a contest of life or death. Immediately after his capture, he and other prisoners were paddled off toward Beaver Island. Quaking with the cold of a damp North wind and famished, Henry turned down the chunks of bread his captors offered him—cut with knives stained in blood that the taunting Ojibwe moistened with their spit and smeared on the bread.

Fog forced the canoe instead to the Odawa encampment at L’Arbre Croche (the present site of Cross Village)—and a surprising turn of events unfolded. Angered that they had not been invited to participate in the massacre, the Odawa seized Henry and the other captives and paddled them back to the fort where they then took control. A consultation between the tribes sent Henry and the other prisoners back to the Ojibwe.

But Henry was spared by a quirk of fate. The winter before, an Ojibwe by the name of Wawatam had unexpectedly adopted him as his brother—asserting that the Great Spirit had told him in a vision years earlier to make an Englishman his brother. Wawatam recognized Henry’s face as the face from his dream. Fortunately for Henry the Indian stepped forward now to convince his tribal leaders to spare Henry and put the trader in his charge.

Safe in Wawatam’s lodge, Henry looked out the next day to see seven (by his count) of the men with whom he’d been held captive, dead—victims of a chief, who, having been away during the attack, wanted to seek his own vengeance on the English.

All told, though small discrepancies exist within accounts, at least 27 Englishmen were killed in the attack and its aftermath, and another dozen or so were still held captive.

Among the captured were Etherington and Leslye, who had been stripped and locked in the fort. When the Odawa arrived with Henry and his fellow captives, they allowed Etherington to send, by way of an Odawa canoe-courier, a plea for help to James Gorrell, commandant at the fort at what is now Green Bay, Wisconsin. The Odawa cooperation with Etherington wasn’t all about their anger at the Ojibwe—they probably calculated that a major would bring a nice ransom.

Gorrell, an astute officer who had won the alliance of the tribes around his fort, gathered 90 Indians and his small garrison, and paddled across Lake Michigan to negotiate Etherington’s release—with Langlade’s help. By mid-July Etherington, Leslye and the other prisoners were headed for Montreal, escorted by a brigade of Odawa.

After their departure, Fort Michilimackinac emptied except for a handful of French traders. Langlade, who was among them, assumed charge. The Indians had dissolved into the Northwoods, both to head to their winter hunting grounds and to hide from British retribution. Brilliant as it was, the Ojibwe coup at Fort Michilimackinac was an empty victory. Though they took the fort, the Indians never wanted it. Their goal, like Pontiac’s, was to drive the English and their settlements out of Native American hunting, fishing and trapping grounds—a defiant attempt to save their doomed lifestyle.

By the following June, 3,000 British troops were marching from Fort Niagara, New York, to Fort Detroit to secure victory over Pontiac and his tribes, whose siege had fizzled out the fall before. A detachment would then head to Fort Michilimackinac. After a harrowing year spent avoiding death through the grace of his adopted Indian family. Alexander Henry had finally made it to the safety of the fort in New York and joined the march to Detroit. With a British reclamation of the Straits virtually assured, Henry wanted to recover goods he’d left behind when he fled. In September the British detachment, Henry included, made it to Michilimackinac where they reclaimed the fort with no bloodshed.

That peace, of course, was only a pause in a much larger struggle for control of North America. By 1776, just 13 years after the deadly game of baggatiway, the loyalties of Langlade, Madjeckewiss (Minweweh had died in another bloody struggle by then) and many of their French and Indian peers from the Great Lakes region had shifted dramatically. Now, they fought with the British in an alliance against their new, shared enemy. The Americans. 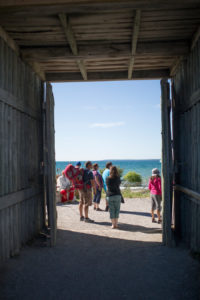