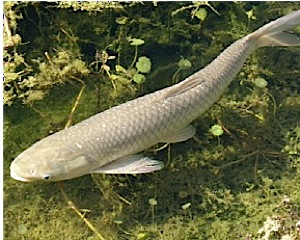 A five-mile section of the Little Calumet River in South Chicago is now closed to all traffic for a period of four to six days as sampling efforts for Asian carp get underway. The closure is necessary for biologists to safely and effectively apply the fish toxicant Rotenone to a more than two-mile stretch of the waterway at T.J. O’Brien Lock and Dam as a part of ongoing Asian carp sampling efforts by the Asian Carp Regional Coordinating Committee (RCC).

Read more about the Asian Carp and Lake Michigan here.

The length and location of the application and fish removal area was chosen to maximize the opportunity to capture Asian carp by including a variety of habitats along a substantial length of river channel that has had a high frequency of positive DNA detections.

The waterway will be treated in one day, and the fish recovery phase of the operation will last four to five days. During that time, the FWS, IDNR, and other participating agencies will aim to recover as many fish in the application area as possible to determine the abundance and type of fish present in the treated area. The toxicant will eradicate Asian carp and other fish in the canal, but does not present a risk to people or other wildlife when used properly.

To meet the requirements of the Rotenone label, during the operation, people should NOT:

During the application and recovery phases, the U.S. Coast Guard (USCG) will implement a safety zone from River Mile Post 321.5 to 326.5 to protect waterway users and workers conducting sampling operations in the vicinity of the O’Brien Lock. Access to the river will be restricted for a period of five to seven days, meaning that boaters will not be able to transit the safety zone until sampling operations are completed and the safety zone is rescinded by the USCG. The safety zone notice for this sampling is published in the Federal Register and is also posted online at  https://www.uscg.com.

Rotenone, a fish toxicant commonly used in fisheries management, was previously used on a six-mile stretch of the Chicago Sanitary and Shipping Canal in December of 2009 while the U.S. Army Corps of Engineers shut down the Electric Barrier System for routine maintenance.  That effort yielded one Bighead carp caught just above the Lockport Lock and Powerhouse approximately six miles downstream of the electric barrier. No Asian carp have been found above the electric barrier to date.

Knowledge of the population size and location of possible Asian carp in CAWS is important data that will inform biologists and decision makers on selecting and prioritizing appropriate future actions to keep Asian carp from moving into Lake Michigan.

Further details on implementation of this new sampling and monitoring plan is  detailed in the updated Asian Carp Control Strategy Framework, released in May 2010, on https://asiancarp.org.

The Framework, which is guided by the latest scientific research, is expected to encompass more than two dozen short- and long-term actions and up to $78.5 million in federal investments to combat the spread of Asian carp.  The full framework is available for viewing at asiancarp.org.