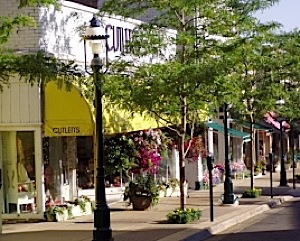 OK , we’ve been busted. Now everyone knows about our sweet cherry pies and even sweeter way of life. It’s author Anne Patchett’s fault. Or maybe the person who should take the most blame is Julie Norcross, founder and former owner of McLean and Eakin Booksellers who invited the famous writer here in the first place. Patchett extols the virtues of Northern Michigan—from Traverse City to Petoskey to Walloon Lake to Harbor Springs to Cross Village—in her article "As American as Cherry Pie," in her Sunday May 23, 2010 New York Times Style Magazine.

McLean & Eakin Booksellers in Petoskey, described by Patchett as “the kind of store where I could happily spend a summer” has been inundated with phone calls and e-mails from across the country since the article came out.

Patchett wrote, “When I walked into the bookstore of this dreamy little town, at that moment, all the other bookstores I’ve known in my life fell away.” Current owner and son of Julie Norcross, Matt Norcross, says he got choked up when he read the article. He says, “It was a wonderful tribute to my mom and to the store. I don’t think we’re in danger of overexposure. I think this was a nice piece of publicity for the entire area.”

Several groups of people came in to American Spoon Foods, also on Petoskey’s main thoroughfare, Lake Street, to buy the sour cherry preserves mentioned in the article, saying they’d just read the New York Times and had to try some. Noah Marshall-Rashid at American Spoon Food says, “I think it’s an important article particularly for young people who are living here and for young people who are thinking about moving home to see Petoskey represented in a such a positive light.”

Stafford’s Perry Hotel, described by Patchett as a “sought-after inn with 79 rooms overlooking Little Traverse Bay” is already reaping the benefits of the article. General Manager Reginald Smith says he’s had several calls from people who live in New York who are flying in and have booked rooms at what locals affectionately call “The Perry” this summer, prompted solely by Patchett’s piece. Smith says, “ We’re thrilled. This article really captures the essence of Northern Michigan. We don’t get exposure on the East Coast very often, so to be talked about in such a flattering way alongside the Hamptons and Upstate New York… it’s just terrific.”

The story, which includes a mouth-watering description of Patchett’s first taste of Traverse City’s cherry pies, is flying across the Internet. Many people are being alerted via Facebook. One restaurant featured prominently in the piece is the Walloon Lake Inn, where Patchett was taken for dinner by boat (a Chris-Craft, of course!) by Julie Norcross and her husband Bill. The Inn received a call first thing Monday morning, just hours after the article came out, from an Oklahoma City resident who was so impressed by Patchett’s comments, she decided to fly in and book three rooms at the inn’s bed and breakfast and dinner for six for three couples. Owner of the Walloon Lake Inn, David Beier, says, “It’s nice to be mentioned and whether or not we get a huge influx of business because of the article or not remains to be seen. I certainly understand her enthusiasm for the area. Both my parents were big New York Times fans, and I wish my Mama could see me now!”

I live on Walloon Lake. This was my summer home for the first half my life, and now I live here full time. When I read the article, I was proud of the place I now call home. But truth be told: I have mixed feelings about this sudden international spotlight on an area I love so much. So does my neighbor Kathy Frech, who says, “It’s a good article. But I do wish this area could be kept a secret. However, I accept it because we need tourists to come to the area and to help Michigan’s economy.” Another neighbor, Joanie Vellenga Clark, shouted, “Keep off our turf!” when she saw the article. She says, “That’s my inner feeling. But the reality is that tourism is needed up here so we can go to good restaurants and enjoy the other benefits of living in Northern Michigan.”

I am gazing out on the calm, azure surface of Walloon Lake as I write this. Only a few boats today, even though it’s unseasonably hot and sunny. It’s the “Before Memorial Day” pause, before summer residents arrive, that those of us who live up here love so much. This afternoon, I will walk along the shore to pick fresh peppermint to make some tea and cook the last of the morels I found two nights ago in my secret spot. I am going to enjoy the peace and quiet while I can.