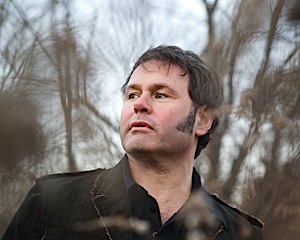 When singer-songwriter Martin Sexton started out his career busking in Boston’s Harvard Square in 1988, he had no idea of the international success that awaited him. Yet after selling 20,000 copies of his demo CD “In the Journey” out of his guitar case, the genre-bending troubadour was signed to Atlantic Records and released two acclaimed albums, “The American” and “Wonder Bar,” before eventually leaving to start his own label.

Now a fan favorite and staple on the touring and festival circuits, Sexton is preparing to kick off a nationwide tour for new album “Sugercoating” (released April 6) with opening act – and backing band – The Ryan Montbleau Band. The tour will include a stop at the City Opera House on Tuesday, April 20 in Traverse City, where Sexton previously played a sold-out show in 2007. We caught up with the musician to talk about the new album, his upcoming tour and the issues that are currently infuriating – and inspiring – him.

MyNorth: Let’s start by talking about the production on your new album, “Sugercoating.” The process was unusual for a modern record, wasn’t it?

Martin Sexton: Basically, I wanted to capture a live vibe on the tracks for this album. Most of my records are like that – captured live as it happens – and this was no exception. We didn’t spend time on preproduction. There were no rehearsals. We’d bring in great musicians and work the tracks out in the studio, almost like a song workshop. I don’t go in and fix every little mistake or vocal hiccup. Actually, some of those mistakes end up working really well. From a technical standpoint also, all of the mics and amps and equipment were vintage.

MyNorth: Does that give the record a unique sound compared to the polished albums everyone else is putting out?

Martin Sexton: I hope it gives it a unique sound. I think it gives it a timeless sound. These albums could have been recorded in the ‘60s or ‘70s, 10 years ago or 10 years from now. I try to make records like blue jeans: classic.

MyNorth: Your past albums have had socially and politically aware lyrics in them, but "Sugercoating" almost sounds in parts like a protest album, particularly the title track. What message did you want listeners to take away from this CD?

Martin Sexton: I think the message would be that we’re all so much more alike than we are different. We’ve been tricked into believing that there are blue people and red people, or black people and white people, or male people and female people. But once you boil away the divisive issues, you realize that’s not true. We’re all Americans; we all share the same Constitution. We’ve just been tricked into believing we’re different.

I’ve had an awakening the last few years. I used to think I was a liberal Democrat; I’m more Libertarian. I’ve been reading a lot, looking into things. For example, the climate change debate – the more I look into it and where the dollars are going, the more parts of it seem contrived into scaring us into bending over. And I’m saying this as a guy who’s come out of the green movement. It’s scary stuff.

MyNorth: You’ve worked hard for your success – starting out with busking in Harvard Square to leaving Atlantic Records to start your own label (Kitchen Table Records). With the industry emphasis now on shows like American Idol and Top 40 radio and overnight success, how does that change the game for young independent musicians getting into the business?

Martin Sexton: My advice for anyone starting out is to listen to your inner voice and to try to stay true to it. Don’t bend to the pressures of the media or what’s cool now or what’s getting played on Bank of America commercials. Our media system is owned by a handful of large multinational corporations. If you don’t fit their mold, you’re not going to get love from them. If you write songs that make people think or be inspired or wonder what they’re doing with their life, you’re probably not going to get picked up by Wal-Mart.

Instead – gig your ass off! Get a diesel van, go sleep on floors and just play anyplace you possibly can. And God bless you for it.

MyNorth: For those in Traverse City who will be discovering them for the first time next week, talk about your work with The Ryan Montbleau Band and what folks can expect from them.

Martin Sexton: Those guys are great musicians. They’re fun and energetic and soulful, and full of musical prowess. They are a good example of a band that came up out of the ashes and played every night to whoever would listen, and now are making a name for themselves. I just finished producing their album. Once we finish this tour, we’ll be in the mixing stage on the album and will be shooting for a fall release.

MyNorth: Do you have any plans to produce more artists or to sign anyone to KTR? Are you interested in that side of the business?

Martin Sexton: I would love to do that when I have more time. I’m in an “on” cycle now with this album and heading into a tour, but on the “off” cycle I’d like to spend more time exploring the other side of the soundboard.

MyNorth: John Mayer has been quoted as saying you’re the “best live performer” he’s ever seen. Who are some of the performers you get jazzed to see live?

Martin Sexton: It’s strange – I see so few live shows that I’m not a part of these days. Let me think. You know, I really enjoyed Brandi Carlisle’s show. She puts on an amazing concert. Even though she’s young, she’s old school. I also saw James Brown right before he died. I took my daughters – it felt like a time warp. That was a trip.

MyNorth: What else gets you creatively inspired?

Martin Sexton: I love movies. I love going online and searching out news stories I can’t find on the big corporate media sites. News that doesn’t fit any agenda. I like being in the Adirondack Mountains for the summer, going swimming and fishing and getting down in the dirt outside. Spending time with my family. That’s the good stuff.

Martin Sexton will be performing with The Ryan Montbleau Band on Tuesday, April 20 at the City Opera House in Traverse City. Doors open at 7:00 p.m.; show starts at 8:00 p.m. Tickets are $27 in advance or $30 at the door and can be purchased at the City Opera House box office or online at cityoperahouse.org. For more information, visit porterhouseproductions.com.

Step inside the City Opera House in this video tour.
X
X