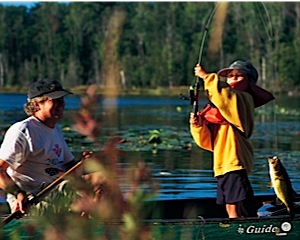 The DNR’s Michigan Fishing Report, which comes out weekly, sees walleye and pike fishing as fair to good and predicts both should only get better. Crappie fishing slowed in the state, however, but the bluegill bite has started to pick up and the catfish are active. Here is what the DNR is hearing about Michigan fishing from around the state.

Elk River – Anglers will find fair to good numbers of steelhead in the river bypass.

Boardman River – Steelhead can still be caught when using spawn bags or wax worms. A few walleye were spotted in the weeds near the dam.

Frankfort – Those able to get out in windy conditions have caught a few brown trout when trolling just inside the breakwalls with planer boards and body baits. Pier anglers also managed to take a few brown trout.

Betsie River – Steelhead fishing was fair with some fish caught above the M-31 Bridge when floating flies on the gravel. The sucker run is pretty much done however a few fish could still be found between the Homestead Dam and the mouth. Small brown trout were caught above Kurick Road.

Portage Lake – Perch anglers were out however only small fish in the 5 to 7 inch range were caught. Try wigglers in 15 to 20 feet of water near the mouth. The northern pike opener was good with some nice fish caught in shallow waters when using spoons, body baits or spinners.

Lake Cadillac – The walleye opener was off to a slow start but the pike anglers did well. Some nice crappie were caught.

Manistee – Steelhead fishing is basically done. Brown trout and a few chinook salmon were caught by those trolling or fishing off the piers. Perch fishing was slow.

Ludington – Boats are catching brown trout and a few salmon when trolling the shoreline. Pier action was slow for perch and brown trout.

The western U.P. is exceptionally dry. Black crappie are showing up in the shallows of inland lakes while other panfish are waiting in slightly deeper water for stable, warm weather. Many rivers and creeks have sucker runs going on. Some of the cooler streams, including those in the Keweenaw Peninsula, contain decent numbers of steelhead.

Black River Harbor – Windy conditions have stopped many boats but those brave enough to venture out were still picking up a few coho.

Ontonagon – As more lake trout start showing up, boat anglers are catching fish in 12 to 40 feet of water. Early morning before the wind picks up is best. Catch rates were spotty for chinook and brown trout.

Marquette – Those fishing the upper harbor caught coho near the breakwall and the bubblers. In the lower harbor, the better catch rates were between the breakwall and the mouth of the Chocolay River. A few lake trout were caught near the white rocks, the Garlic River and out towards the "Sand Hole". There were reports of limit catches out near Stannard Rock. Water temperatures remain near 42 degrees.

Little Bay De Noc – Perch were caught off the access site at Masonville Road when jigging wigglers in 20 feet of water. South of the Narrows, anglers were still-fishing with worms in 20 to 30 feet of water.

Days River – The better steelhead fishing was north of US-2.

Big Bay De Noc – Still had fair to good catches of perch in Garden Bay although the fish were getting smaller. Most were still-fishing with worms in 8 to 10 feet of water near the commercial landing.

Big Fishdam River – Has a good number of white suckers.

Au Train – Still had good coho fishing for those trolling rapalas or spoons. The hot spot was between the Red Rock area and the mouth of the Au Train River. Lake trout were also caught however the fish were somewhat scattered. Anglers did catch some nice brown trout and the occasional chinook salmon.

Munising – Boat anglers reported fair to good catches of coho near Pictured Rocks and in Trout Bay when trolling body baits. Pier and shore anglers caught a few splake but the overall catch rates were slow.

Grand Marais – Coho fishing was fair but steelhead fishing has tapered off. Pier anglers were catching more whitefish along with the occasional menominee. A single egg on a hook works best.

St. Mary’s River – Pink salmon along with a few small steelhead were still being caught off the bridge on Portage Street when using spawn bags or chrome colored flatfish. Small chinook salmon in the 17 to 19 inch range were caught on the back side of the Edison Power Plant at Sault Ste. Marie when casting chrome Hot-n-Tots. A few yellow perch were caught in some of the bays of Lake Nicolet. Try 4 to 6 feet of water with minnows and worms.

De Tour – A limited number of steelhead were seen below the weir in Albany Creek. Boat anglers were fishing Drummond Island and Scott Bay for perch however catch rates were slow.

Cedarville and Hessel – Angler pressure has been low. Those fishing off the Hessel pier caught small perch and the occasional splake. Anglers are reminded that splake season does not open until May 1st. Those fishing Musky Bay and Cedarville Bay have caught perch however the fish were too small to keep.

Carp River – Anglers are targeting steelhead but the run was slow. Most were still making a day of it by catching white suckers. No word on smelt.

Mullett Lake – The public access site and the DNRE access site on the east side of the lake have the docks in and are ready for use. Surface temperatures have ranged from the high 40’s in the north to the low 50’s in the south near Pigeon Bay and the Indian River. High winds have made boating difficult. Walleye fishing remains closed until May 15th. Those targeting northern pike were still-fishing in 8 feet of water in Pigeon Bay. Trout anglers were trolling stick baits in 6 to 15 feet of water off Red Pine Point but no fish were caught.

Rogers City – Few boat anglers have been out because of the strong winds. The fish cleaning station is currently closed.

Alpena – Boat activity has started to pick up however catch rates were not good for those targeting salmon, steelhead and walleye. A few suckers were caught.

Thunder Bay River – Steelhead fishing has been slow, and the sucker run is pretty much done. Some large steelhead are there for the taking, so try black or brown artificial flies. The best tactic is to wade into the river and cast close to the dam where the spawning holes are. Be extremely careful because the bottom is uneven. Small brown trout were still being caught. Smallmouth bass were hitting on artificial flies and rapalas.

Harrisville – The walleye are in and around the harbor. Catch rates were steady with some anglers getting a bonus steelhead or Atlantic salmon. Early morning and late evening were the most productive when using body baits in clown or fire-tiger.

Oscoda – Boat traffic stayed in the river and around the pier. Those fishing off the end of the pier did manage to catch brown trout, steelhead and Atlantic salmon.

Higgins Lake – Limits of rainbow trout were caught in shallow waters along the south end of the lake. Try 70 to 80 feet of water along the drop-off for lake trout.

Houghton Lake – The walleye opener was pretty good for those trolling crank baits or using jigs with leeches. Pike anglers were out but many of the fish were small. The bluegill and crappie bite slowed with the colder weather. Look for the best bite in the afternoon after the sun has warmed the water.

Tawas – Those trolling crawler harnesses and crank baits did mange to catch some walleye in the evening in 10 to 25 feet of water. Pier anglers were getting a few walleye on both sides of the harbor. Pike and brown trout were caught on the lake side. Perch anglers were doing a lot of sorting to find a few keepers.

Tawas River – Some walleye were caught in the lower river.

Au Gres – Walleye were caught by those trolling stick baits in 20 to 30 feet of water.

Au Gres River – Those fishing near the Singing Bridge at night caught steelhead and walleye when casting rapalas in the surf.