A Traverse City Home Renovation to Inspire Your Dreams 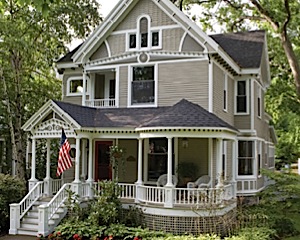 A stroll down Traverse City’s historic Sixth Street, aka Silk Stocking Row, with its lumber-era Queen Annes shows how dutifully our by-gone builders obeyed the architectural dictum of their times: detail can never, ever be overdone. So it doesn’t matter then that the gazebo-like porch on the 1903 charmer at 429 Sixth Street was not original to the home. That more-than-generous detail, added in a recent renovation, flaunts enough Victorian flourish to satisfy the pickiest preservationist. In fact, the Grand Traverse Heritage Center was so impressed with the careful restoration work on the home, porch included, that it awarded the house a top preservation award in 2007.

When Charles and Rebecca Kass bought it in 2002, the once fashionable cottage was fraying at the elbows. The old windows rattled, the decorative trim was thick with paint, the basement was filled with wind-blown leaves. Worst of all, the front porch deck had been long-since ripped away, ignominiously replaced with a concrete slab and a few cement steps under the original roof. “Really bizarre,” said Chaz Stallman, of Stallman Builders, the main contractor.

Stallman and his crew rebuilt the porch decking to its original height, tricking it out with columns and railing created on site. Following orders from the historical society, they placed the porch steps with precision. “If you look down Sixth Street, all the handrails line up,” Stallman said.

The windows were swapped for energy-efficient models, all except the two curved panes on the main floor. The trim and siding, mostly in good shape, were repaired and replaced as necessary with new pieces milled to replicate the originals. Then Jay’s Painting & Remodeling scraped, caulked and delicately repainted the exterior in Bunglehouse grays and white, a sophisticated color scheme that Rebecca Kass had admired on a house in Slab Town, another historic Traverse City neighborhood.

The interior renovation was even more dramatic. The Kasses wanted to preserve the historical feel of cottage, but needed it to be 21st-century functional. Much of the cottage was gutted. Upstairs, the master bedroom gained a vaulted ceiling and the tiny bedroom next to it was converted into a master bath and walk-in closet. The existing bath was refurbished and closet space added in the remaining two bedrooms. All the way down, a newly poured floor with radiant heat and augmenting structural members created 900 square feet of cozy family room in what had been an “awful” Michigan basement, Rebecca Kass said.

The addition on the back of the house, a drafty bedroom next to a frumpy kitchen, was also in need of urgent attention. Stallman and Kass redesigned it in a contemporary, open style, replacing the bedroom with an eat-in kitchen and sitting area, adding a fireplace, new countertops and custom cabinetry. A powder room was squeezed in, and a new deck with outdoor kitchen was added on the back. The front rooms on the main floor were left intact, although painstakinglyrepaired and restored. Throughout the cottage, Stallman’s carpenters saved as much woodwork as they could and matched the rest. “We really tried to make the new look old and to make the old function better than it did,” Stallman said.

The old flooring, however, was removed to install tubing for in-floor radiant heat, which was tied into the existing system of radiators ( the original radiators, and a few more added for show, were refurbished by Wheelock & Sons Welding.) A new floor of wide-plank Brazilian cherry was added throughout the house.

One feature that needed fortunate little work was the staircase, with its ornate pattern of vertical and horizontal spindles. Buffed and re-stained, the oak staircase shines as a centerpiece, as grand a balustrade as any in the neighborhood.

Kass and her husband sold the property shortly after the work was furnished because the house proved too big for just the two of them, she said. Yet the restoration project—and the award from the Heritage Center—was gratifying. As a Realtor and a Traverse City-area native, Kass is keenly interested in residential architecture and preservation. “I appreciated the chance to keep this area beautiful and unique,” she says.