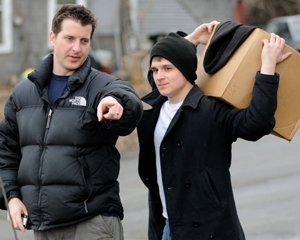 The Scrapper is a movie currently being filmed in Grand Rapids about a young man who attempts to find validation through life as a street fighter.  The film is inspirational for local filmmakers because of its grassroots production style.  Independent films like this one are giving local creative talent the opportunity to gain firsthand experience in a new field.

In the Traverse area, the new Michigan film production and infrastructure tax incentives have done more than attract more Hollywood productions—they have united the creative talent in Northwest Michigan so that new, truly local, independent projects can successfully take shape.

The crew of The Scrapper now includes four Traverse City locals and one yooper brought to the project by Michael Piotrowski, owner of Traverse City’s Kids Creek Productions and co-producer of the project. The roster includes:

The film is also crewed by a number of film students and some professional-level volunteers from the Grand Rapids area.

Hollywood productions are often unable to employ nascent filmmakers, primarily for union-related reasons. The Scrapper is privately financed by the film’s writer, Michael Dault, and his business partner in Tip Toe Productions, Barbara Smith. Private financing by the filmmakers is the purest definition of independent filmmaking as it means that with no Hollywood studio money supporting such an expensive venture, everything must be managed on a shoestring. It also means that the production may invite talented, hard-working individuals to receive on-the-job training and mentoring so that they may become employable on future, higher budget productions in Michigan’s newest growing industry.