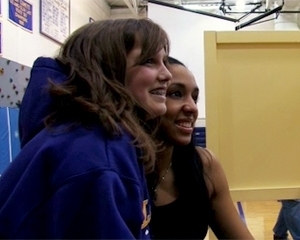 Meet Alisha Glass, a nationally recognized setter for the three time consecutive NCAA Division I title champion volleyball team at Penn State who returned home to Leland to speak at Leland Public School, her alma mater. Glass shared her vision in a talk titled ""Setting in Pursuit of a Dream," recalling what it meant to her to grow up in Northern Michigan and attend a school that houses kindergarten to 12th grade, and what it took for her to pursue her dream of being one of the country’s best volleyball players.

Students, parents and community residents listened as this poised college senior shared her journey of fulfilling her dreams, beginning as a Leelanau youth through her current position on the US Women’s National Volleyball team. It was apparent that Glass’ leadership skills, commitment and innate attributes allowed her to continually establish and attain her goals without forgetting the influences of her past. You can’t help but be inspired by this young woman’s genuine enthusiasm and belief in dreams and you’ll want to keep Glass in mind to see if she will be representing the United States at the London Olympics in 2012.

Glass appeared at Leland Public School as part of the Leland Educational Foundation’s "Insight and Inspiration Speaker Series," being held throughout the 2009/2010 school year to illuminate, entertain, and inspire the community by providing an interaction with Leelanau’s many, often nationally-recognized, local experts in their respective fields. These individuals bring the world to Leelanau while sharing how Leelanau has influenced their lives.

Read a short interview with Alisha Glass about her past, her future and her greatest influences.
X
X