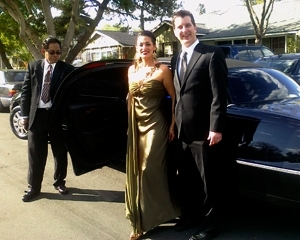 A few things you don’t see on television:

Limousines have to take a special route up Highland Ave so that they may pass through a security check. Armed guards line the streets fortified by armored trucks.  Each limousine must be checked inside and out, underneath and in the truck for … b-list actors?  When Ed Asner told the interviewers from KTLA that the men with the guns scared him, they hustled him off camera right quick.

There is only one red carpet for all attendees, but nominees and recognizable celebrities are discreetly directed toward one side of a red rope that is closer to the cameras.  On the other side of the rope guests press close to the camera side of the carpet, but are nagged by politely aggressive security guards to “keep moving forward please.” Nobody listens.  In the land of the self-obsessed, armed security guards have no power.   Folks just take their time walking down the red carpet and make a 10 second journey last for 20 minutes. There is an open bar and boy do they mix ‘em strong.

There are television monitors broadcasting back to the audience the show they are watching.  So the Academy Award audience is simultaneously watching the live show and the graphically enhanced television version of itself.  P.S. You know those horrid dance numbers that accompany a tribute to the Best Musical Score nominees?  They look fantastic in person.  Live stage shows were meant to be viewed live.

If you have to go to the bathroom you’d better be quick because they shut the doors tight at the end of the commercial break and will not open them up for you to return to your seat until the next break.  In years passed, nominees have missed their chance to ascend the stage to receive their Oscar because they couldn’t return from the bathroom in time.

Not everyone stays in the theatre to watch the show the whole time.  People like to gather in the halls and corridors (read: near the bars) to do what everyone likes to do best in Hollywood, talk business.

During the frequent commercial breaks everybody texts each other their congratulations and sympathies.

The tone of the event is the same as every entertainment industry party: formal charity fundraiser, premiere party, celebration, opening, public relations event.  People never attend industry events to let their hair down, they are always there to work.  These people are driven to succeed in a highly competitive industry that demands excellent professional connections.  They are intelligent, dignified, charming, gracious and respectful of one another (to their faces).  And to quote Roxie Hart, “That’s show biz…kid.”

Read more on the Piotrowskis evening at the Academy Awards.