Traverse City Does the Zumba! 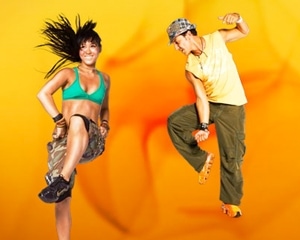 Zumba fuses hypnotic Latin rhythms and easy-to-follow moves to create a one-of-a-kind fitness program that will blow you away.  Zumba fanatics achieve long-term benefits while experiencing an absolute blast in one exciting hour of calorie-burning, body-energizing, awe-inspiring movements meant to engage and captivate for life!
The routines feature interval training sessions where fast and slow rhythms and resistance training are combined to tone and sculpt your body while burning fat. Add some Latin flavor and international zest into the mix and you’ve got a Zumba class!

In the past years, Zumba has become a revolution, spreading like wildfire, and positioning itself as the single most influential movement in the industry of fitness. As of July 2009, the Zumba program is being taught at over 50,000 locations in 75 countries, has sold millions of DVDs, and has changed the lives of Zumba fanatics worldwide with an astonishing six million participants taking Zumba classes every week. Why? Because it’s the best party around.

In Traverse City, instructor Noel DeShano teaches Zumba free on Monday nights from 7 to 8 pm at the West Side Community Church (4975 East Traverse Hwy M72 West).  Click for a list of DeShano’s other classes as well as the many other Zumba classes in Northern Michigan.

HistoryCelebrity fitness trainer, "Beto" Perez, stumbled upon the concept of Latin-inspired dance-fitness in his native Cali, Colombia in the mid-‘90s.One day, he walked into his aerobics class and realized he had forgotten his aerobics music. Thinking quickly, he grabbed whatever tapes he had in his backpack. Beto’s tapes were comprised of songs he loved, the traditional Latin salsa and merengue music he listened to all his life. But it was a challenge to improvise a whole class on the spot using non-traditional aerobics music. Beto rose to the challenge and from this last-minute improvisation a revolutionary new concept in fitness was born – the Zumba Fitness-Party™! The class soon became the most popular class at his fitness facility.

Timeline
1999  After his success is Colombia, Beto brought the class to the United States, and in 2001 he was approached by entrepreneurs Alberto Perlman and Alberto Aghion to create a global company based on his fitness philosophy. The three young entrepreneurs trademarked the word Zumba® and set a goal to expand the brand all over the world.
2002  Perlman and Aghion secured a deal with a large infomercial company to launch the concept nationwide resulting in the sale of hundreds of thousands of videos in the U.S. market. The overwhelming response created a demand for more Zumba® instructors, so Zumba Fitness® created an instructor training program to satisfy the growing demand. The program was an instant success. By September 2006, there were thousands of Zumba® instructors worldwide.
2003  Zumba Fitness® teamed with the Kellogg Company to develop a fitness campaign for the Hispanic market. The Kellogg Company has since expanded the campaign to five additional countries. The Zumba® program has been featured on millions of boxes of Kellogg’s® Special K® cereal around the world.
2004  Zumba Fitness® launched a successful infomercial campaign in Spanish for the U.S. Hispanic market and Latin America, increasing sales to millions of DVDs in over 30 countries.2005  The explosive demand for Zumba® instructors across the nation and abroad spurred the creation of the Zumba Academy™, the educational division of Zumba Fitness. With top-notch leadership from a diversified team of professional choreographers, fitness experts and certified education specialists, the Zumba Academy has raised the bar and set a new standard in fitness programs, ensuring the highest level of integrity, quality and dedication to excellence, and exceeding industry standards.