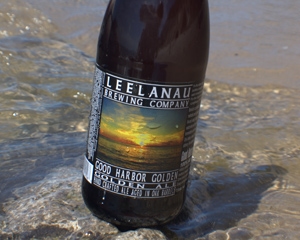 My North caught up to Leelanau Brewing’s Charles Psenka, whose partnership with Ron Jefferies (who won the competition with his label’s Jolly Pumpkin Oro de Calabaza) created Good Harbor Ale, to get the scoop on what the Time’s tasters called a “funky” brew.

My North:  Funky is a good thing in the beer world, right?

Charles Psenka:  Yes, definitely.  It hints at the unique flavor of the beer.  It’s a testament to Ron’s work—he’s got a gift for bringing a little  ‘farmhouse funk’ to his brews, and he nails it every time.

Charles Psenka:  It is a beer that was designed to drink on the beach at sunset.  Its distinction is its sour notes, which are all naturally occurring.  We also age all of our beers in French Oak.  The truth is, however, we’re just lucky to have Ron brewing our beer.  His work literally changed my life, and I think he’ll go down in history as one of America’s greatest brew masters.

My North: So where’s your ideal setting to sip Good Harbor Golden Ale?

Charles Psenka: Sitting on the deck of the Cove in Leland, watching the sunset (it matches the artwork on the bottle).  All of our beers are an ode to a place.  Our inspiration comes from northern Michigan.

Good Harbor Golden Ale runs on an extremely limited release—just 300-400 cases per year—to find out where you can get your hands on some visit leelanaubeer.com.  Just don’t take a drink and think you can walk barefoot on the beach. It’s still March, after all.